By Newsroom on September 16, 2016Comments Off on L’Eden by Perrier-Jouët: Interactive Lifestyle Experience Comes to London

From 16th – 25th September, spanning the duration of both London Fashion Week and London Design Festival, L’Eden by Perrier-Jouët is celebrating the creative effervescence of two of the biggest cultural weeks, with an enchanting installation from leading Parisian designer Noé Duchaufour-Lawrance and the world’s first bio-responsive garden by Bompas & Parr. 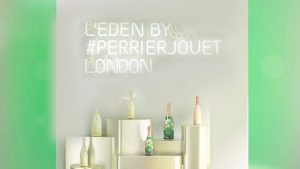 Thursday 15th September saw the highly anticipated launch of L’Eden by Perrier-Jouët, where VIP guests were cordially invited to experience a first glimpse into London’s most enchanting installation. The ground floor lounge has been curated by internationally renowned French designer Noé Duchaufour-Lawrance, alongside beautifully designed chairs and tables hangs an interactive installation, which links nature to the city creating an unexpected contrast of calm in an urban landscape.

Held in the basement of L’Eden by Perrier-Jouët, guests were transported into the world’s first bio-responsive garden created by Bompas & Parr, where nothing is as it seems and the plants within mimic your every move… This oasis of natural charm combined with a touch of magic, provided a completely unique experience.

The star-studded champagne bash saw international model, Naomi Campbell, take the spotlight behind the DJ decks with Fat Tony, to produce a set that brought the a-list crowd to their feet. Arizona Muse, Luke Evans, Erin O’Connor, Roxie Nafousi, Olivia Inge, Kara Rose Marshall, and Fredrik Ferrier were spotted among the crowd, making the most of the Perrier-Jouët champagne, which was in full flow throughout the evening.

L’Eden by Perrier-Jouët: Interactive Lifestyle Experience Comes to London added by Newsroom on September 16, 2016
View all posts by Newsroom →