By Newsroom on July 5, 2016Comments Off on Leo Burnett & Kellogg’s Bran Flakes Turn Breakfast into a Blank Canvas

The spot, ‘The Art of Bran Flakes’, which broke on Monday July 4th and marks a new strategy for the brand by focusing on flavour.

It aims to challenge the perception that many whole wheat foodstuffs are not tasty enough by demonstrating the many delicious breakfasts that can be created from a simple base of Kellogg’s Bran Flakes.

The ‘Art of Bran Flakes’ paints Kellogg’s Bran Flakes as the perfect breakfast blank canvas. In the 30-second spot three different ‘artists’ are portrayed creating their own tasty masterpieces such as a girl who eyes the flakes surrounding by a number of bowls filled with breakfast ingredients. Inspired, she starts her work and the creativity begins. 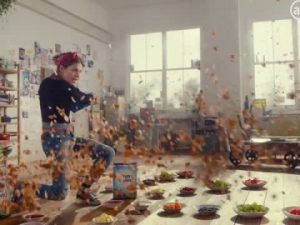 These creations will also appear on pack, in a wider digital advertising campaign and across the revamped Kellogg’s Bran Flakes website, kelloggsbranflakes.co.uk. Media planning and buying is through Carat.

Creative Director Charlie Martin says: “Our ambition was to inspire people with loads of new ways to eat Kellogg’s Bran Flakes, and for them to see it as the foundation for endlessly tasty breakfast possibilities.”