By Newsroom on October 16, 2014Comments Off on Leo Burnett Rolls Out First Crowd-sourced Burgers for McDonald’s 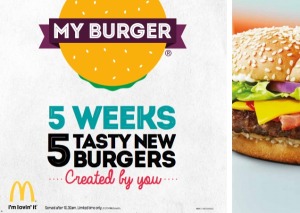 McDonald’s has introduced ‘crowdsourced’ burgers across its menus, kicking off its My Burger campaign with a TV and digital ad.

From October 15, the first of five burgers created by members of the public will go on sale at McDonald’s restaurants as part of its nationwide My Burger campaign.

The fast food restaurant has unveiled five winning burgers designed by members of the public and launched the campaign with a TV ad by Leo Burnett last night. It will run until Saturday 15th November alongside digital and radio advertising.

Display advertising will run across Facebook, Yahoo, Skype, YouTube, WeTransfer and MSN. A partnership with KISS FM also aims to drive “excitement” around the new burgers.

The burgers go on sale October 16 across 1,200 McDonald’s stores, following a competition by Razorfish that gave people the opportunity to design their “dream beef burger”. The fast-food chain received 98,000 and out of the top 11 as voted for by the public, five were chosen by a judging panel that included Phil Vickery and Mark Hawthorne, managing director, McDonald’s UK. They will be on sale until 18th November.

The winning recipes are ‘The Big Uno’, ‘The Sweet Chilli Fiesta’, ‘The Ultimate Supreme’, ‘The Big Spicy Bacon’ and ‘The McPizza Pepperoni Burger’.

“This is the first time we have given our UK customers the unique opportunity to design their own beef burger, for the chance to appear on our world-famous menu,” Alistair Macrow, senior vice president, CMO, McDonald’s UK said.

“We have been overwhelmed by the public’s response. The five burgers that have made it onto our menus look and taste fantastic and I hope our customers will enjoy trying them out too.”

Leo Burnett Rolls Out First Crowd-sourced Burgers for McDonald’s added by Newsroom on October 16, 2014
View all posts by Newsroom →