By Newsroom on June 7, 2016Comments Off on Let Them Eat Lunch! Morrisons Serves the Patron’s Lunch in the UK

Royal fans who have missed out on a ticket to the Queen’s 90th birthday lunch on The Mall, need not be disappointed because Morrisons is extending the invitation to its 11 million customers by serving up its own value version of The Patron’s Lunch. 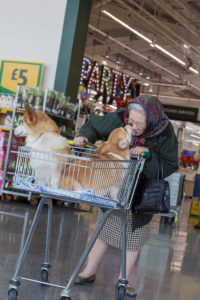 Customers had a surprise as it was seemingly launched by the Queen in a store renamed Ma’am-orrisons, to celebrate the special occasion. She was seen giving her royal seal of approval to the £1.25 lunch menu, which includes a sandwich and cream-filled scone, freshly prepared in store. It will be served on the 11th and 12th June in hundreds of Morrisons cafés up and down the country.

The lady bearing the striking resemblance to the Queen wasn’t actually Her Majesty but the work of spoof-celebrity photographer Alison Jackson.

The Queen’s doppelganger has been captured in a series of tongue-in-cheek images from enjoying a slice of the Elizabeth Sponge in the Morrisons café to dancing in the aisles to a specially created Majesty-inspired soundtrack including hits by (you’ve guessed it) Queen. Other songs on the playlist include ABBA’s Dancing Queen and Bruce Springsteen’s, Queen of the Supermarket.

For those marking the occasion with a get together at home, the retailer has prepared a feast fit for a Queen, including a three-tiered Elizabeth Sponge, an adorable Morrisons Clarence the Corgi Cake, a crown topped pork pie and a Royal bouquet of patriotic-coloured flowers. 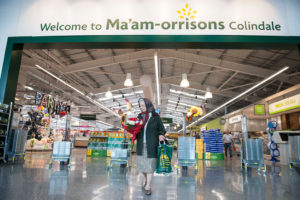 The Queen impersonator was spotted stocking up on her must-have items at the checkout, where the assistant scanned her groceries to the beat of God Save the Queen. All of the items are available to buy in store and online to help shoppers across the UK recreate the Patron’s Lunch at an affordable price, so they don’t miss out on the celebrations.

Morrisons spokesperson Andy Atkinson comments: “Millions of people are on a budget, but want to take part in this special occasion, so we’ll be doing our bit to bring people together in our cafés and celebrate the 90th birthday of our longest serving monarch.”

Let Them Eat Lunch! Morrisons Serves the Patron’s Lunch in the UK added by Newsroom on June 7, 2016
View all posts by Newsroom →