By Newsroom on July 19, 2018Comments Off on Long Live the Local: British Beer Alliance Aims to Save British Pubs from Closure

The pub – a cultural institution, quintessentially British icon and bedrock of local communities – faces significant challenges ahead. With increasing financial pressures from a range of taxes, three local pubs close their doors for good every day. Now, Britain’s Beer Alliance – the cross-industry group comprising brewers and pub companies large & small, as well as industry bodies including The British Beer & Pub Association, launches a major new campaign to help save ‘the local’. 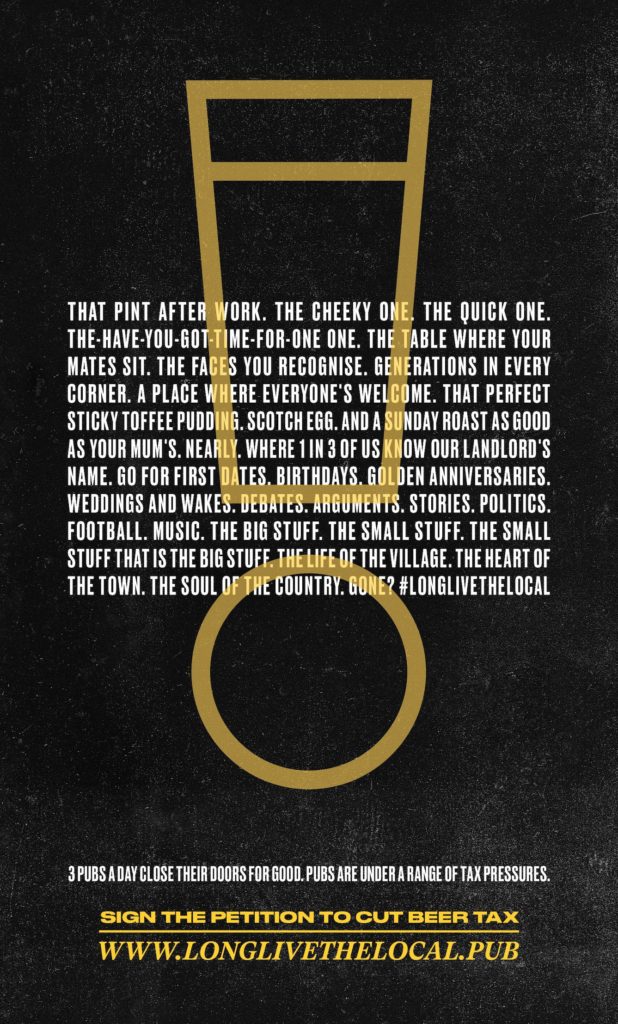 Called ‘Long Live The Local’ the new campaign will celebrate the important role local pubs play in our community, our culture and our national identity, demonstrating that they are a force for good. It will create a national groundswell of people celebrating and supporting their local pubs, while simultaneously calling on Government to relieve some of pressure pubs are facing by cutting beer tax – which is currently set to increase for at least the next three years.

Should the level of beer tax – which is already three times the EU average and 12 times higher than Germany – continue to increase year after year, beer sales will fall, pubs will continue to close, and jobs will be lost, the new campaign will argue.

The campaign has taken six months to develop, including extensive strategic and creative development driven by consumer research, and will be supported by a £3 million investment each year for at least the next three years.

It will comprise a striking, large-scale out-of-home campaign, national press ads, a cinematic online film, a PR campaign fronted by model and pub-owner Jodie Kidd, an influencer programme, Twitter promoted hashtag and video and an online hub at longlivethelocal.pub. Each pillar of activity will drive consumers to sign a petition saying no to the planned increase in beer duty, which will be delivered to Government ahead of the Autumn Budget. 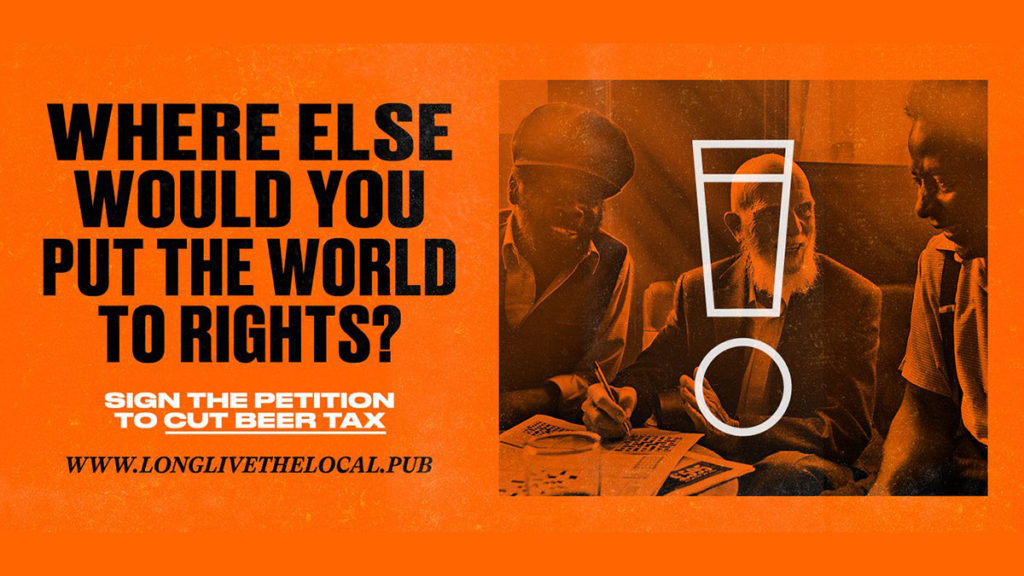 Central to this activity is the film, directed by Tom Green, which explores what the pub means to society. A true snapshot of everything that makes pubs so important, it showcases the full range of life that happens within them – from catching up with friends to listening to live music, weddings to wakes – and everything in between. 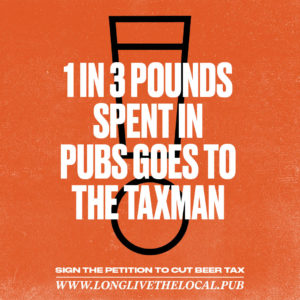 With 900,000 people in the UK reliant on the pub, brewing and other related industries for work – adding £23 billion to the economy and contributing £13 billion in taxation – the campaign will also reach politicians to remind them of the economic importance, as well as the cultural importance, of the local pub and wider brewing industry.

MPs will be made aware of the campaign & issues through lobbying events, localised PR and targeted media buys around Westminster and the upcoming party conferences, while pub-goers, owners and employees will experience the campaign in more than 15,000 British pubs through a selection of branded glasses, beer mats, window stickers and posters.

The campaign represents a change in approach from Britain’s Beer Alliance, which has previously focused on promoting the beer category. 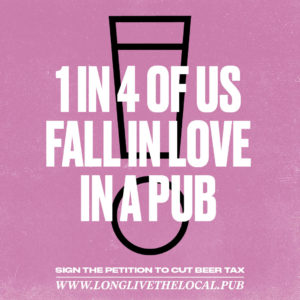 “In light of the range of tax pressures pubs face, the number of precious institutions we have already lost forever, and the human impact of planned beer duty rises, we decided we needed a change in our approach and a new campaign,” says David Cunningham, Programme Director.

“Long Live the Local” will remind people that pubs are great places where a wide variety of life’s events – big and small – are played out, making them a unique part of our modern British culture and identity. It will, however, also raise awareness of the jeopardy our local pubs face from an unprecedented range of tax pressures, specifically beer duty, which should leave the Government with no illusions about the strength of feeling behind protecting the UK’s pubs and the communities that rely on them.”

The campaign was devised by creative agency Havas London and is their first work since winning the account in March this year. Havas were supported by fellow Havas UK agencies Havas Media (media planning and buying), Ekino (web build), Havas Helia (CRM), One Green Bean (PR), Socialyse (influencer outreach) and HKX Productions (OOH/print). Film production was through Stink Films, photography through LGA, with political insight and programme development through Hanover. 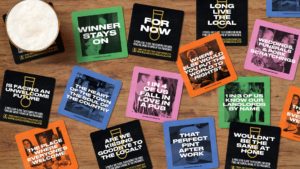 Ben Mooge, Executive Creative Director at Havas London adds: “The pub – a bedrock of communities up and down the country – is under threat. The grassroots-style design of these posters and the universal, relatable scenes in the film capture the urgency and importance of this campaign. Coupled with all the other elements – a proper team effort on something so culturally important – it will be impossible to ignore.”

Some of the largest and most influential organisations in the beer and pub industry are backing the campaign, including Molson Coors, AB InBev, Heineken and Carlsberg. Supporters also include pub companies big and small and industry organisations such as and the British Beer & Pub Association.

Long Live the Local: British Beer Alliance Aims to Save British Pubs from Closure added by Newsroom on July 19, 2018
View all posts by Newsroom →