By Newsroom on February 19, 2018Comments Off on Lucky Charms Unleashes the Power of the Unicorn in its New Permanent Marshmallow Cereal 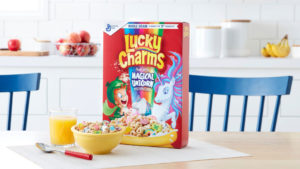 For the first time in 10 years, Lucky Charms is introducing a new and permanent marshmallow – the magical unicorn! The magically delicious brand tapped into the imagination and creativity of young minds to hand select the newest charm and the decision was unanimous.

“Our goal is to not only create a cereal that families and cereal fans will love and enjoy, but to inspire magical possibilities and help spark imagination and fun no matter what the age,” said Josh DeWitt, marketing manager of Lucky Charms. “That’s why, after 10 years, we decided to introduce a new charm with the help of the keepers of magic themselves – kids. They spoke, and after hearing their love for the magical unicorn, we listened.” 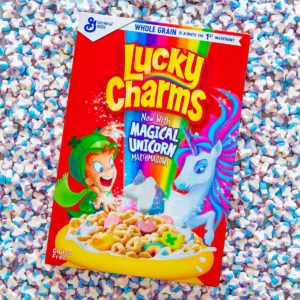 From magical and lucky to cool and colourful, both boys and girls agreed that these mythical creatures had timeless magic that was the perfect fit for the only truly magical marshmallow cereal. The new unicorn charm, which features hues of bright purples and blues, is the first-ever marshmallow to be inspired and created by kids.

With the entrance of the new magical charm, consumers will have to say goodbye to the hourglass marshmallow, which has been a staple in the magical line up for more than a decade. Lucky Charms marshmallow blend will continue to feature eight lucky charms including hearts, stars, horseshoes, clovers, blue moons, rainbows, red balloons and now magical unicorns.

In addition to great texture and delicious taste, Lucky Charms is made with whole grain as the first ingredient, fortified with 12 vitamins and minerals, and is a good source of calcium. Cereal-lovers can now enjoy a new magical mix of beloved, colourful Lucky Charms marshmallows with crunchy, whole grain oats. The new unicorn charms have already begun to appear in boxes of Original and Chocolate Lucky Charms cereals and will be available more widely at major grocery retailers and big box stores in March.

Lucky Charms Unleashes the Power of the Unicorn in its New Permanent Marshmallow Cereal added by Newsroom on February 19, 2018
View all posts by Newsroom →