By Newsroom on February 26, 2018Comments Off on Lucozade Reunites with Lara Croft in Explosively Hilarious New Tomb Raider Campaign

Lucozade Energy is partnering with the new Tomb Raider film, released by Warner Brothers in March, for a bold campaign featuring action from the movie.

Created by Grey London, the campaign introduces the agency’s new “Energy Beats Everything” creative idea for the brand, highlighting that having the right energy can help you overcome any situation. 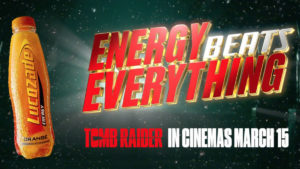 The campaign reunites Lucozade Energy with the Tomb Raider franchise almost 20 years since the video game version of Lara Croft first starred in a 1999 commercial for the energy drink.

In the new TV ad, Grey reinterprets the movie trailer, taking scenes from the film, which stars Alicia Vikander as Lara Croft, and giving them a fresh new spin. An epic movie voiceover narrates the action, showing all of Lara Croft’s thrills and spills, but adding some unexpected comedy to the adrenaline-fuelled ride.

Breaking on 26th February, the campaign marks a return to TV screens for Lucozade Energy after a break of two years. TV activity is supported by Out-Of-Home, in-store, digital and social. 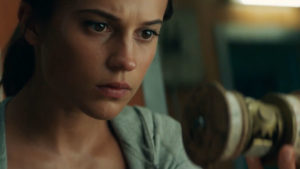 Steven Hind, Head of Marketing at Lucozade Energy said: “Lara Croft and the new Tomb Raider film are fantastic partners for Lucozade Energy because they are the perfect expression of the Energy Beats Everything attitude. Our previous association with Tomb Raider adds extra power and resonance to our action-packed new campaign, which sees two heritage brands unite, in a thoroughly contemporary and dynamic way, to prove they’re still as popular as ever.”

Caroline Pay, Co-CCO at Grey London said: “The Tomb Raider partnership is a brilliant way for Lucozade to reach out and entertain a new audience. Coming off the back of Wonder Woman in 2017, the public appetite for strong, bold and genre busting women characters shows no sign of slowing down.”