By Newsroom on November 18, 2016Comments Off on Maison Mumm Team with Kevin Rolland to Launch the Snowstorm by Mumm Platform

A 9-time medalist with 5 golds at the X Games and Olympic Bronze medalist at Sochi in 2014, Rolland embodies the House’s motto of Dare, Win, Celebrate and personifies pushing the limits. This new partnership will be on display at an exciting series of snow-themed events across the world, showcasing the most daring side of skiing.

In the new action short film Fast Forward 2: The Eclipse (above), Kevin and his friend Julien Regnier take the audience on a white-knuckle ride down the mountain, showing off a succession of hair-raising stunts on their way to an exclusive Mumm party. The tone of the film is pure Mumm – a perfect fit with the Maison’s track record in adventure sports like sailing, horse racing and Formula E.

As the natural partner for daring celebrations, the Maison will be extending the skiing theme to its Snowstorm by Mumm parties, which offer a brand new way of celebrating the winter. 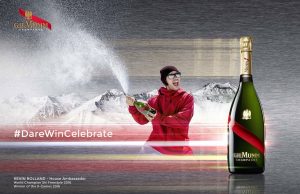 Staged at select New York venues, these exclusive events will invite partygoers to live out Mumm’s values of Dare, Win, Celebrate in a series of bold challenges. Among them, the Mumm Daring Delivery VR experience and video game – developed exclusively for Mumm – will enable them to compete in a thrilling downhill race to be first to arrive at the party. And beginning next year, Snowstorm by Mumm will showcase the Maison’s iconic red sash on the podiums and in the clubs of the world’s most prestigious ski resorts.

This virtual ski challenge puts the emphasis firmly on the sport’s most daring side, in line with Mumm’s special status among Champagne houses. Mumm is the first Champagne brand to launch an interactive Virtual Reality experience, combining the high-definition technology of a VR headset with a connected balance board. It is just part of Snowstorm by Mumm’s innovative take on wintertime entertainment, and will be accompanied by other snow-themed rituals – like a spectacular “skibrage” bottle-opening.

With its high-profile ambassador Kevin Rolland and this cutting-edge 3D game, Snowstorm by Mumm offers a perfect illustration of the Mumm motto: Dare, Win, Celebrate.

Maison Mumm Team with Kevin Rolland to Launch the Snowstorm by Mumm Platform added by Newsroom on November 18, 2016
View all posts by Newsroom →