By Newsroom on August 26, 2016Comments Off on Malibu Brings the IoT to FMCG as it Turns Bottles into Digital Touchpoints 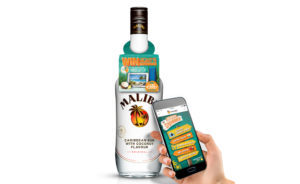 Malibu is looking to capitalise on consumers’ “contactless payment behaviour” by turning 40,000 of its bottles into media platforms, offering consumers access to exclusive content simply by tapping their smartphone on the bottle.

Malibu is using the same technology used for contactless payments to create 40,000 ‘connected’ bottles, allowing users with Android phones and the latest iPhone 6/6s to access exclusive content, including prize draws, drinks recipes and playlists, as well as a bar locator.

The activity, which rolls out at the beginning of September, is part of its #BecauseSummer campaign. It has been developed through a partnership between Malibu and creative agency SharpEnd and follows work undertaken at the Absolut – which like Malibu is also owned by Pernod Ricard – innovation lab in Stockholm. A digital campaign will also be launched to promote the new bottles.

The UK pilot uses NFC technology which means that, unlike QR codes, consumers do not have to download an app. Tapping the ‘sunset’ logo on the Malibu bottle, should in theory, open a mobile browser that leads directly to the content.

According to the brand each bottle will turn into a direct, digital touchpoint for consumers and was created after research by Malibu found that consumers are increasingly looking to buy “experiences and not products”.

“We have identified an opportunity to use our bottles as media platforms, we are trying to find ways to connect with consumers more intimately. By turning bottles into vehicles that directly connect to consumers’ phones, we are providing added value,” Jo Alexander, Malibu marketing manager at Pernod Ricard UK, told Marketing Week.

Alexander added that the technology should feel “natural” to consumers because it mimics technology like Apple Pay and consumers are increasingly comfortable using contactless payment systems.

“While NFC is quite a new term, the behaviour is very natural. These days, people are comfortable using their Oyster card or contactless debit card to pay for things.”

She added: “This was a great opportunity to take that accepted behaviour and move it on to consumer goods and turning it into an experience.”

Although the technology is initially being used on a trial basis, Malibu’s parent Pernod Ricard will be closely monitoring its performance. It will also be taking the learnings to potentially apply the technology to its other alcoholic brands.

“[This technology] is applicable globally. We will certainly be taking the insights garnered from this technology and bring it back into the business,” Alexander added.

“This is not a PR stunt. Success isn’t necessarily about the numbers, it’s very much about gaining exclusive insight on how consumers react to new tech and exploring the boundaries of where technology can go.”

Malibu Brings the IoT to FMCG as it Turns Bottles into Digital Touchpoints added by Newsroom on August 26, 2016
View all posts by Newsroom →