By Newsroom on February 16, 2018Comments Off on McDonald’s Cuts Cheeseburger from Happy Meal as Part of Larger Health Push 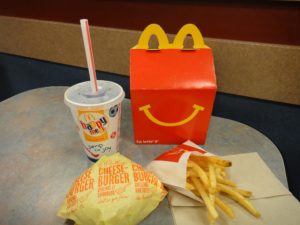 McDonald’s Corp is removing cheeseburgers from U.S. Happy Meal menus and shrinking the french fry serving in one “Mighty Meal” as part of a new global plan to cut calories and make its food for children more healthy.

The changes announced Thursday come as the world’s biggest fast-food chain for the first time established global limits for calories, sodium, saturated fat and added sugar in Happy Meals, which consultants and franchisees say account for roughly 15 percent of sales in the United States.

The chain’s U.S. restaurants will continue to offer Happy Meal cheeseburgers on request, which nudges diners to change behaviour. When it did the same thing with Happy Meal sodas in 2013, some customers switched to water, milk or juice.

McDonald’s said it will reduce calories and sodium from its six-piece chicken McNugget Mighty meal for older children by halving the french fry portion size.

The company also is adding bottled water to Happy Meal menu boards and offering chocolate milk on request as it is reformulated to reduce added sugars. 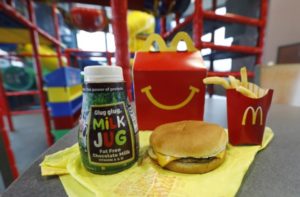 Currently, 28 percent of Happy Meal combinations offered on menu boards in 20 of McDonald’s major markets meet the new criteria. In June 2018, McDonald’s USA will hit the new calorie, sugar and fat goals and be 78 percent compliant on sodium.

As part of its continued partnership with the non-profit Alliance for Healthier Generation, McDonald’s also is working on plans to incorporate more healthy Happy Meal options for entrees as well as fruit and vegetable sides. Among other things, restaurants in Italy offer a Happy Meal grilled chicken sandwich; pineapple spears are on the menu in Spain; and cooked corn is a vegetable option in China, Japan and Taiwan.

The company, which in the past has taken heat for using toys to promote its Happy Meals, plans to offer books as a year-round replacement option in 100 markets by the end of 2019 – up from 20 today.

McDonald’s does not break out Happy Meal sales but said that family trips represent 30 percent of all visits to McDonald’s around the world.

McDonald’s Cuts Cheeseburger from Happy Meal as Part of Larger Health Push added by Newsroom on February 16, 2018
View all posts by Newsroom →