By Newsroom on June 16, 2016Comments Off on McDonald’s Hopes To Unite Nations In Its New Ads For Euro 2016 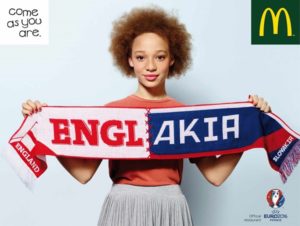 As a partner and official restaurant of the UEFA Euro 2016, McDonald’s couldn’t miss out on the chance to welcome the European fans to France, once again under its signature “Come as You Are.”

In an outdoor campaign, created by BETC Paris, McDonald’s celebrates all fans, regardless of their origins or the team they support.

The visuals, photographed by Kim Reenberg, show fans proudly holding up somewhat different scarves, supporting two countries at the same time with the names merging into a new imaginary country. For example, the meeting between Sweden and Italy becomes ‘SWETALY’.

With the campaign, McDonald’s wants to continue celebrating tolerance, diversity and generosity.

McDonald’s Hopes To Unite Nations In Its New Ads For Euro 2016 added by Newsroom on June 16, 2016
View all posts by Newsroom →