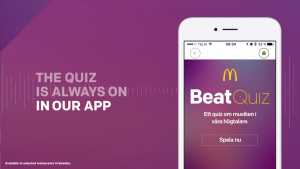 McDonald’s hopes to appeal to young people, driving them to download its app on iOS and Android in order to participate in the Beat Quiz, a game quizzing diners on the songs currently playing in the restaurant. The digital initiative provides interactivity, a distraction while orders are served and serves as a channel to encourage greater downloads of the app.

Ulf Persson, head of digital customer experiences at McDonald’s Sweden, commented: “A never-ending digital pop quiz, BeatQuiz is packed with incredible entertainment that McDonald’s guests are going to love. We can’t wait for people to start challenging pals and impressing others with their music trivia knowledge. Personally, I can’t stop playing it. And you won’t be able to either.”

DDB Stockholm and design studio Apegroup piggybacked Soundtrack Your Brand’s API. They had to delve into the digital architecture to ensure that the quiz could generate questions in real time, identify new music and deliver to everyone in the restaurant, the same experience in tandem. 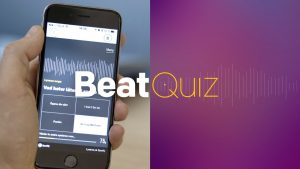 Joel Brosjö, Soundtrack Your Brand’s chief of experience, said: “We think BeatQuiz is a game changer, in that it lets McDonald’s apply online engagement in an offline channel. BeatQuiz lets McDonald’s guests engage with what’s going on in the physical restaurant, by creating an interactive digital layer on top of the restaurant space, in a way that is entertaining, engaging and scalable. Amid digitisation, the retail and hospitality sectors are undergoing a major shift, and BeatQuiz is a great example of the experiences brands need to bring to the table to stay on top.”

He concluded that the work adds value for customers – some of whom will be waiting in booths as their order is brought to them via the new digital ordering feature. “It is about making McDonald’s a social place, where it is nice to simply hang out.”

The game has two feature modes, an instant play mode and the easier competitive mode where users can challenge friends, all documented by a leaderboard (cleared daily) and a hall of fame that documents the best performers each day.

McDonald’s Sweden Gamifies its Music Playlists with Cloud-Powered Soundtrack Your Brand Quiz added by Newsroom on May 10, 2017
View all posts by Newsroom →