By Newsroom on March 31, 2016Comments Off on McDonald’s Wants to Remind People it’s Open 24-hours in Latest Spot

McDonald’s is aiming to remind customers that over 600 of its stores are open 24 hours in the fast food chain’s latest campaign called ‘We are awake’.

Created by Leo Burnett London, the 60-second and two-30 second TV adverts feature real people as they go about their evening and night time activities from studying to feeding a baby, before visiting a McDonald’s restaurant. 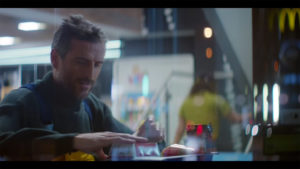 The campaign’s soundtrack is set to ‘Rhythm of the Night’ with vocals by Hattie Webb.

The campaign is supported by an always-on media approach, with several bursts throughout the year that will feature new OOH, radio and digital executions.

The digital aspect of the campaign serves users with relevant and contextualised night-time statistics about what everyone is up to during the alternative 9-5.