McDowell’s No.1 and DDB Mudra Group Celebrate the Bond of Bringing Friends Together

By Newsroom on November 23, 2016Comments Off on McDowell’s No.1 and DDB Mudra Group Celebrate the Bond of Bringing Friends Together

McDowell’s No.1 Soda by United Spirits Limited has launched the ‘Yaaron Se Bane Hum’ (made by our friends) campaign, which is an evolution of its iconic ‘No.1 Yaari’ (No.1 Friendship) campaign and represents a new perspective on celebrating the bonds of brotherhood and bringing friends together. This is a soul stirring campaign showcasing the integral role that friendship plays in an individual’s journey of self-discovery. 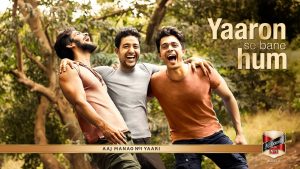 Developed in partnership with DDB Mudra Group, the new McDowell’s No.1 campaign is built on the insight that millennials are on a journey of self-discovery where their Yaars become their second family and are a constant support system during those coming of age moments in a person’s life that shape the person you become.

The essence behind ‘Yaaron Se Bane Hum’ is captured in the line – ‘Jeetun mein toh jashn manati, Haarun toh taaqat ban jaati’, which is part of the poetry written by Sonal Dabral, Chief Creative Officer of DDB Mudra Group for this campaign. Dabral both wrote and directed the campaign which was shot in Mauritius.

Through an entrancing travelogue, the McDowell’s No.1 TVC captures a catalyzing moment of self-discovery for bands of brothers and brings to life the role friends play in helping an individual overcome his moment of weakness or doubt.

“McDowell’s No.1 is famous for its iconic and inimitable marketing and ‘Yaaron Se Bane Hum’ campaign is no different. The fundamental creative shift that we have made with ‘Yaaron Se Bane Hum’ campaign is by showcasing No.1 Yaari through an individual’s perspective and hence making it a narrative that will make people introspect about how friends anchor them through life’s defining moments. I was so inspired and moved by this narrative that I decided to not just write the poetry but even direct the film myself. Here’s to our deepest friendships. Here’s to No.1 Yaari!” adds Dabral.

Subroto Geed, Senior Vice President – Marketing, at United Spirits Limited says, “We believe the “Yaaron se bane hum” campaign is an incredibly strong idea that is brought to life with an outstanding creative. The journey began with defining ‘Yaari’ through the bonds of brotherhood and this new campaign celebrates how that dynamic transforms an individual through his journey of self-discovery. Backed by media-first thinking, we are excited to deploy our biggest campaign to date through an intelligent multimedia approach.

McDowell’s No.1 and DDB Mudra Group Celebrate the Bond of Bringing Friends Together added by Newsroom on November 23, 2016
View all posts by Newsroom →