By Newsroom on October 5, 2018Comments Off on Mike Gatting OBE Opens the New Look Pavilion End for Fuller’s 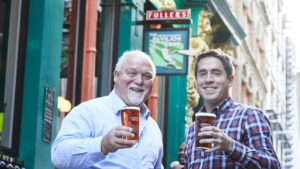 The England cricket legend Mike Gatting OBE who famously captained and played for both Middlesex and England reopened the Central London pub The Pavilion End on 4 October 2018. The City-based sports pub has been extensively refurbished by London brewer and premium pub company Fuller’s.

Customers were given the opportunity to meet and greet the first-class former English cricket player throughout the evening. Furthermore, guests that arrived wearing a cricket top were given a free pint and those in full whites received a drink and a meal. 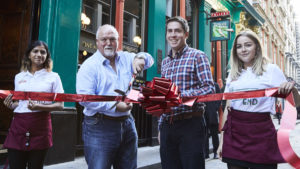 The new look Pavilion End has been completely updated and boasts a modernised trade area and bar, a covered, heated and secluded beer garden to the rear seating 40 customers and a private function room. The pub has maintained its loyalty to cricket, retaining its cricket memorabilia throughout. The new function room is available for hire including an excellent AV system, and contains the old boardroom table from the former Gales Brewery in Horndean. 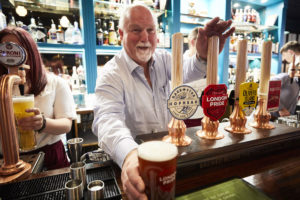 A revamped kitchen has been installed making way for a more developed menu showcasing the fresh ingredients and mouth-watering dishes that Fuller’s Kitchens are known for. These include mains like Fuller’s own Chalcroft Farm beef burger, steak and ale pie or a roasted half chicken.

For those who wish to mix-and-match, sharing boards like a veggie meze board, 1kg of chicken wings and Owton’s sausage board are available alongside small plates like lamb kofta or spinach and cauliflower pakoras. Customers can enjoy a selection of five specials each day (such as seared tuna or pappardelle braised rabbit), paired with a range of quality Fuller’s beers. 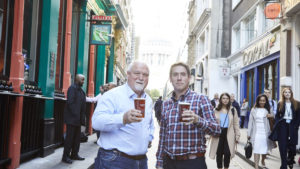 General Manager Garth Warren said: “We are proud to be the City’s only cricket pub –many people are surprised to find us so far away from a cricket pitch. The Pavilion End is looking superb after its refurbishment and my team and I cannot wait to welcome in both old customers and new. I’m sure that everyone will enjoy having a drink and sampling the new menu as well as watching some sport in a fantastic atmosphere.”

Mike Gatting OBE said: “It’s great to see a pub celebrating cricket in this way. Cricket is such a social sport and The Pavilion End really embraces this – I know where I’ll be watching the next England Test Match if nobody gives me a ticket!”