By Newsroom on May 23, 2014Comments Off on Miller Lite Asks Beer Drinkers To ‘Show Us Your Miller Time’ 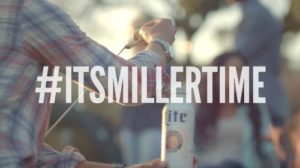 The summer of 2014 is officially Miller Time in America. And to make sure that fans are making the most of their 100 days of summer, Miller Lite is going to reward those who share their Miller Time photos with the world.

“We know that it is getting harder and harder for people to unplug, check-out and spend time with their friends,” said Ryan Reis, Miller Lite senior director. “After a brutal winter, it’s finally time to get outside and celebrate Miller Time and we’re excited to feature our consumers doing just that over the 100 days of summer.”

Legal drinking age fans of Miller Lite just need to snap a picture of their epic Miller Time summer moment and tweet the photo with #ItsMillerTime for a chance to win a spot in the brand’s first user-generated national television commercial, set to debut this fall.

Additionally, ten lucky @MillerLite followers who share their best photos on Twitter will each win $1,000.  Ten new winners will be selected every day for 100 days.

Signifying the first Miller Time of summer and to celebrate the national tweet-to-win contest, Miller Lite is inviting fans in Chicago who are 21 or older to get their photo taken in front of the world’s largest film camera, on May 21 at 2 North Riverside Plaza from 4:00 to 7:00PM (CST).

Food and beverages will be provided.

Miller Lite Asks Beer Drinkers To ‘Show Us Your Miller Time’ added by Newsroom on May 23, 2014
View all posts by Newsroom →