By Newsroom on October 3, 2013Comments Off on Miller Lite & Danny Trejo Aren’t Letting Anything Get In The Way Of Your Miller Time 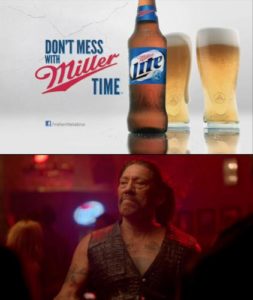 Danny Trejo knows how to get a point across and now he’s going to put that talent to work to ensure that nothing interferes with Miller Time. Work obligations, time constraints, even mobile phones can sometimes get in the way of Miller Time. Miller Lite has partnered with Trejo, an original Hollywood tough-guy, to protect these sacred good times with friends.

Trejo will star in a Miller Lite advertising campaign that breaks today on national Spanish-language television. He will also make special appearances across the country in 2013 and 2014 to remind consumers to not let anything mess with Miller Time. This is the first campaign created by the brand’s Hispanic agency of record, Casanova Pendrill.

“Trejo is a perfect fit for the Miller Lite brand and for protecting Miller Time. He’s a man of values, he’s one of Hollywood’s hardest working actors and he knows how important it is to have a solid group of friends to get you through the good and bad times in life,” said Rudy Rodriguez, senior director of multicultural marketing at MillerCoors. “Danny is a good guy with a tough edge. Our consumers will relate to him and his unique success story and we’re excited to have him in our corner.”

Trejo will block several obstacles, from mobile phones to tow trucks, to preserve good times shared with friends. In addition to the television commercials and special appearances, he will be featured in branded retail promotions, out-of-home advertising and a digital video campaign in English and Spanish to air on the brand’s Latino Facebook and YouTube pages later this month.

“A good time with friends is something we all want but often don’t have time for, so I’m excited to be part of a campaign that champions friendship and an original brand, like Miller Lite,” said Trejo.

Miller Lite & Danny Trejo Aren’t Letting Anything Get In The Way Of Your Miller Time added by Newsroom on October 3, 2013
View all posts by Newsroom →