By Newsroom on September 26, 2017Comments Off on Mister Cartoon Designs Limited-Edition Bottle for Tequila Cazadores 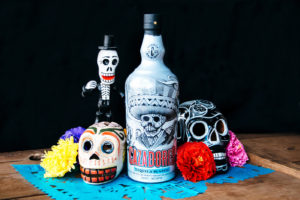 Mister Cartoon has also created a set of skull bandanas – inspired by illustrations from the limited-edition bottle – that will be available through here with 100% of proceeds from sales going towards disaster relief in Mexico.

“Mister Cartoon is an artist who, like Tequila Cazadores, boldly carries his heritage with him, allowing his passion for who he is and where he came from to shine through his work,” said Manny Hinojosa, Brand Ambassador for Tequila Cazadores. “We are honoured to collaborate with him on a special Día de los Muertos bottle design, celebrating one of the most traditional holidays in the Mexican culture.”

The Mister Cartoon X Tequila Cazadores Día de los Muertos bottle is adorned in symbolic black, white and gray artwork, with illustrations of a skull to honour the memories of lost loved ones, a rose to welcome new beginnings and a woman to represent love and the importance of celebrating the good times. The Tequila Cazadores iconic stag is part of the design as a reminder to be bold and fearless in the pursuit of dreams.

“It was an honour for me to create a design for Tequila Cazadores. a brand that shares my passion for preserving heritage and guiding the future from the past,” said Mister Cartoon.