By on July 26, 2016Comments Off on Molson Coors & Sky Unveil New Ale to Mark the Start of Football Season 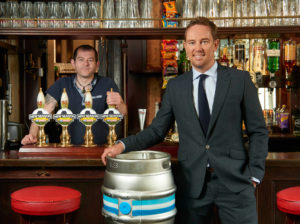 Molson Coors and Sky have announced a limited release Premier League-inspired ale, New Season (4.2% ABV), which has been created to mark the start of the 2016/17 season.

New Season was unveiled by Sky Sports football presenter Simon Thomas. The ale is brewed with English malt and hops and is a light, blond ale with a biscuit backdrop, subtle bitterness and spiciness in the flavour. New Season is available now in the UK independent on-trade through Molson Coors guest ale programme as well as through various Mitchells & Butlers managed pubs.

The launch of New Season is the latest milestone in the long-term partnership between Molson Coors and Sky, who have collaborated to offer publicans stocking Molson Coors products up to 33% off the price of their Sky TV subscription. ‘New Season’ is the second special edition ale to be created by Molson Coors and Sky, following on from the popular ‘Done Deal’ released in January 2016 to mark the January Transfer Window.

Alpesh Mistry, Customer Marketing Director at Molson Coors, says: “Following Leicester’s historic Premier League win in May, the 2016/17 season promises to be the most exhilarating yet. Our brewers have created this fantastic ale to celebrate the new season, and we hope pub-goers nationwide will join us in raising a toast to the new season of football.”

David Rey, Managing Director at Sky Business, says: “The forthcoming football season on Sky Sports is set to be even bigger and better, with 126 Premier League matches for pubs to attract fans to their venue, including the new Friday evening match slot. Plus there’s 127 exclusively live matches from the English Football League, as well as EFL Cup, SPFL, Scottish Cup and football from around Europe. There’s never been a more exciting time to share your customers’ passion for the beautiful game with Sky Sports and Molson Coors.”

The launch of New Season follows the news that Carling, the UK’s biggest ale brand and leading member of the Molson Coors portfolio, confirmed a three-year partnership with the Premier League as its official ale partner in May.

Molson Coors & Sky Unveil New Ale to Mark the Start of Football Season added by on July 26, 2016
View all posts by →