By Newsroom on January 30, 2015Comments Off on Mountain Dew Kickstart Debuts New Ad Ahead of Super Bowl

The advert signals the launch of two new flavours and is the first stage of the brand’s comprehensive ‘It All Starts with a Kick’ marketing campaign.

Directed by Keith Schofield and created by BBDO New York, the 90 second slot features three friends – including ‘So You Think You Can Dance’ star D-Trix – playing computer games in a dusty basement before sharing a couple of cans of Kickstart together. 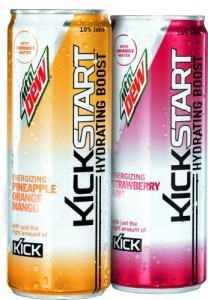 The parkling juice drink has a startling effect on the buddies as they each begin to throw some ridiculous dance moves in time with the Hip Hop/EDM soundtrack, ‘Out The Speakers Feat Rich Kidz’ by A-Trak and Milo & Otis.

Before too long inanimate objects find themselves taken with the beat and the whole room dances uncontrollably, from the sofa to the trophies to the deer head on the wall, until the trio leave to find a party.

Jamal Henderson, director of brand marketing at Mountain Dew, said the launch of the campaign now was about “strategically activating around the biggest pre-game imaginable”.

In addition to the TV slot, the drinks giant will be linking up with Snapchat to roll out real-time consumer-driven Snapchat stories, along with a variety of digital and social extensions through platforms such as Vine, Twitter and YouTube and the creation of a new microsite.

Mountain Dew Kickstart Debuts New Ad Ahead of Super Bowl added by Newsroom on January 30, 2015
View all posts by Newsroom →