Originally introduced in 2017, Dewey took on a role as the heir to Dale Jr. following his retirement and the new face of Mtn Dew.

2018’s new campaign represents the second chapter in Dewey Ryder’s story as Dale. Jr.’s replacement – not only on the track but as the face of Mountain Dew. 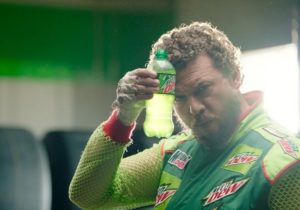 The 360-degree marketing program will include engaging digital and social media, broadcast and out of home advertising.

The new commercial highlights Dewey’s new ride, the perfect manifestation of his fearless and pioneering approach to racing in automobile form, complete with a Mtn Dew fridge.

The hilarious spot also chronicles a phone conversation with Dale himself, following Dewey’s first appearance driving on the raceway, along with a Q&A with ESPN personality Marty Smith.

The spot will first air during the Martinsville Speedway race on Sunday, March 25th and run through July 2018 across multiple channels.