By Newsroom on November 22, 2017Comments Off on Nature Valley Pays Tribute to ‘Battle of the Sexes’ to Drive Tennis For Everyone with Westfield Activation

To celebrate the inclusivity of tennis and as part of Nature Valley’s commitment to driving participation in tennis in Britain, the cereal bar brand and official partner of British Tennis, created a full size tennis court in Westfield Shopping Centre, Shepherd’s Bush, and invited tennis champions, celebrities, social media influencers, and the general public, to get on court and play more tennis.

In the match-up, British women’s No 1 and Nature Valley brand ambassador Johanna Konta faced off former Wimbledon champion and ATP legend Pat Cash.  This match was inspired by the iconic Billie Jean King vs Bobby Riggs ‘Battle of the Sexes’ 1973 match re-told in the film by Fox Searchlight Pictures of the same name in-cinema 24th November starring Emma Stone and Steve Carrell, for which Nature Valley is the sole promotional partner of the UK theatrical launch. 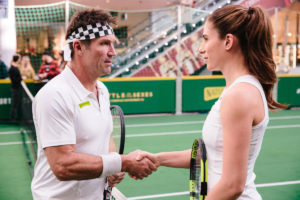 Konta’s winning mentality and impressive fitness ultimately saw her defeat Cash 6-3 in a one-set shoot staying true to the historical event script, but not before both players had gained some help from umpire and compere and ex-British #1 Greg Rusedski, and some willing ball boys and girls joining in the match.

After the main match, TV personalities Jamie Laing and Jessica Wright joined to support Konta and Cash on court for a fun-filled Battle of the Sexes mixed doubles before opening the court for players from the general public to get involved in their own ‘Battle of the Sexes’ rendition. Old and young, skilled and less so, fit and not, the impactful and impressive court hosted many a match throughout the day with tennis being the winner.

The court was recreated by Nature Valley as part of its wider campaign The Court is Yours – aimed at getting more people back into playing tennis. The event aimed to showcase how tennis can be played in a number of unexpected locations. The activity has been created and managed by creative agency Space.

Arjoon Bose, UK and Northern Europe Marketing Lead for Nature Valley at General Mills, said: “Tennis is the 2nd most followed sport in Britain with participation on the rise and it’s one of the most exciting times to be involved with it here in Britain. Following on from launching our first ever integrated campaign #TheCourtIsYours this summer, we wanted to elevate and amplify our tennis conversation through the storytelling lens of this movie partnership with ‘Battle of the Sexes’ paying tribute to a landmark event that championed inclusivity and democracy in a sport that we are proud to support here. 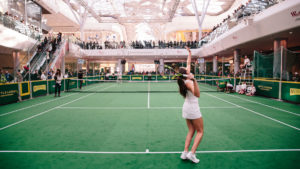 With the support of an inspirational role model spokesperson like Johanna, we hope to continue to inspire anyone and everyone to go out and to move people from watching to playing because we believe tennis is for everyone and that every surface is a court. Our dream is to eventually have a Nature Valley protein bar in every tennis kit in Britain.’’

David Atkinson, Managing Partner, Space comments: “This experience epitomises what Nature Valley, and The Court is Yours is all about. Whilst Cash vs Konta brought focus to the event through the Battle of the Sexes Crunch Match for the partnership with the movie launch later this week, today was also about showing people that anyone can play tennis, anytime, anywhere, and at any time of the year.  It’s been a great privilege to be part of it, and to have collaborated with Nature Valley in their mission with the LTA in bringing more people into tennis.”

Nature Valley was also the Official Global Partner of the recent ATP World Tour Finals, where it saw increased attention around the O2-centred end of season championships involving the top eight ranked male tennis players in the world and the opportunity to remind fans to pick up a racket and play.

Nature Valley Pays Tribute to ‘Battle of the Sexes’ to Drive Tennis For Everyone with Westfield Activation added by Newsroom on November 22, 2017
View all posts by Newsroom →