By Newsroom on May 2, 2017Comments Off on New £2M Campaign to Support New McCoy’s Chips is Now Live on TV

Led by the insight that flavour is the number one purchase driver for 51% of snackers, McCoy’s is bursting back on to TV screens with its newest flavoursome launch to the market: McCoy’s Chips! 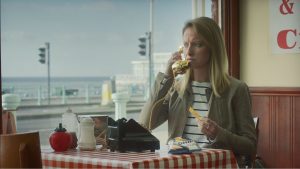 Live from 27th April to 10th May, the 20” TV spot is set in a traditional fish and chip shop on sunny Brighton seafront, in which the protagonist Sarah receives a mysterious phone call from Flavour. As she picks up the famous golden receiver and tries the irresistible full-on flavour of McCoy’s Chips, she soon realises the ominous eyeballing seagulls are after them in force. 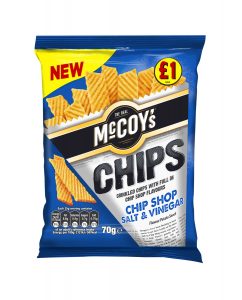 Supported by a £2million investment, the TV advert is accompanied by a subtitled social film as well as an outdoor campaign and shopper activation. The humorous campaign positions McCoy’s Chips as ‘the love child of the chip and crisp’, highlighting its unique offering and reinforcing the brand’s taste credentials.

The new campaign aims to drive further awareness and sales of the McCoy’s Chips range, which is already proving to be a success delivering more than £1m RSV. Launched in 2016, the impactful ‘When Flavour Calls’ campaign resonated with consumers, delivering phenomenal results for both the brand and the Crisps and Snacks category, with McCoy’s immediately seeing a 29% sales uplift in the media campaign period.

Dan Winslet, Marketing Controller for KP Snacks says, “Everybody knows that Seagulls love their chips so who better to recruit for our new McCoy’s Chips ad than our cheeky seaside friends, desperate to get their beaks on the newest Chip Shop inspired innovation in Crisps and Snacks”.

New £2M Campaign to Support New McCoy’s Chips is Now Live on TV added by Newsroom on May 2, 2017
View all posts by Newsroom →