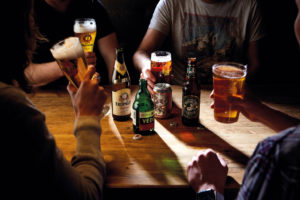 Carlsberg UK has launched its 2016/17 Crafted portfolio of world, craft and speciality beers, with an extended range, a new craft cider section, and a focus on British products.

The portfolio is complemented by the Crafted Handbook, an in-depth guide to current trends amongst producers and consumers, featuring unrivalled category insights alongside recommendations from industry influencers, including award-winning beer writer Pete Brown and The Thinking Drinkers, Ben McFarland and Tom Sandham. The handbook provides information on each brand, including tasting notes and range positioning tips.

This year, 14 new draught beers, 17 new packaged beers and an extended seasonal range, available only at certain times of the year, have been added. Responding to market trends, it also offers an up-weighted canned beer selection and a craft cider section for the first time – two sub-sectors which are fast gaining traction with consumers.

Paul Waller, director of third party brands at Carlsberg UK said: “This year we have a balanced range from the USA and Europe and greater emphasis on the UK, recognising the quality of innovation from home-grown brands and products. Importantly, we monitor trends and put new beers and ciders through a rigorous taste test before adding them to the portfolio. The handbook is an accessible, entertaining and educational tool, suitable for publicans who want to venture into craft beer for the first time, as much as it is for aficionados looking for inspiration on the latest innovations from the category.”

New additions for 2016/17 includes a focus on British craft brews:

Also new to the portfolio are Belgian Wit beers including Hitachino Nest White Ale from the Hitachino brewery in Japan, and Vedett White from Duvel Moortgat in Belgium, alongside many international brands including Little Creatures from the Fremantle Brewery in Australia and The Seventh Step from the ®atecký Pivovar brewery in the Czech Republic.