By Newsroom on August 21, 2018Comments Off on New “Welcome to the Fun%” Campaign by Smirnoff Celebrates Good Times with Quality Vodka for Everyone

Diageo, the makers of Smirnoff, the original vodka for everyone, know the best things in life do not have to be – and in fact, should not be — expensive or exclusive.

That’s why the world’s most awarded vodka has partnered with some of the most fun personalities around: actor and producer Ted Danson, actress and author Jenna Fischer, LGBTQ television personality Jonathan Van Ness, LGBTQ advocate and actress Laverne Cox and comedian and actress Nicole Byer.

This diverse group anchors a new creative campaign entitled “Welcome to the Fun%” that celebrates good times with a quality product everyone can afford.

So, what is the Fun%? The Fun% is anyone and everyone who wants to have accessible, unpretentious fun. It is the dreamers, doers and shakers who want it all, but do not want to pay too much– and they shouldn’t! In a world where we are all more money conscious and the power of FOMO is reinforced by social media, the Fun% is redefining what it looks like to have a good time with their own personal brand of scrappy, resourceful creativity.

The new Smirnoff campaign showcases this with a range of diverse cast members, in age, ethnicity, gender, sexual preference, and background, and all of whom embody the Fun% in their own, unique way.

“We are living in a time when cultural and financial inequality is at its highest. We want to show people that you don’t need to spend a lot of money to come together and have a good time,” said Jay Sethi, Vice President, Smirnoff, Diageo North America. “Smirnoff is a top quality vodka sold at an affordable price, so that no matter who you are, where you are, or who you are with, you can always responsibly enjoy quality vodka.” 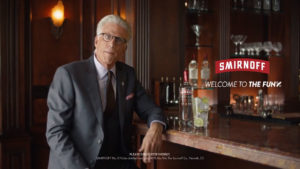 The TV spots each depict different scenarios in which longtime Smirnoff partner Danson teams up with a fellow cast member to tout the brand’s award-winning credentials, “Made in America” heritage, and encouragement of fun yet responsible drinking, all ending with the tagline “Welcome to the Fun%.” The spots all share a humorous, playful attitude and give a nod to Smirnoff’s inclusive qualities.

“It’s always fun partnering with Smirnoff because it truly is a quality brand that is made for everyone,” said Ted Danson when discussing the new campaign. “What I love most about this new series is the different personalities that Smirnoff brought to the table and how that came through in the spots. Never would I have thought I would be playing a game of “who wore it better” with Laverne Cox for example – definitely me by the way – but it just goes to show that with Smirnoff, you have the perfect vodka, at the perfect price, to pair with a good time for everyone.”

“I really love what Smirnoff is doing with their Fun% campaign and what it stands for,” said Jonathan Van Ness on the set of the Smirnoff Fun% shoot. “It’s all about being unapologetically yourself and having fun the way you see it – and I am living for it! These days I think too many of us get wrapped up in the hustle and bustle of life, work and social media that we forget to make time for having good, old-fashioned fun that doesn’t break the bank.”

In addition to the films, starting at the end of August, Smirnoff is rolling out a series of out-of-home advertisements in New York, Chicago and Los Angeles, as well as content on the brand’s social media platforms. These pieces feature Chopped judge Chef Amanda Freitag, Instagram Star and YouTuber Toddy Smith, plus-size fashion designer Gabi Gregg, and celebrity Drag Queen & reality TV phenomenon Alyssa Edwards in different fun and colourful settings, and all enjoying Smirnoff in their own ways.

This is not the first time the Smirnoff brand and Danson have partnered for a creative campaign. In 2017, the duo teamed up for the Smirnoff No. 21 Vodka “Only the Best for Everyone” campaign, which paid homage to the product’s “Made in America” heritage. The Fun% campaign is an evolution of this, as Smirnoff stays true to its brand value of providing great quality vodka at an affordable price.

New “Welcome to the Fun%” Campaign by Smirnoff Celebrates Good Times with Quality Vodka for Everyone added by Newsroom on August 21, 2018
View all posts by Newsroom →