By Newsroom on November 1, 2016Comments Off on New Zealand and Japan Collide as Steinlager Unveils new Tokyo Dry

Steinlager Tokyo Dry, the iconic brewer’s newest beverage and biggest launch since Steinlager Pure hit shelves 10 years ago, was unveiled to the public on Noverber 1.

The new brew takes the best of New Zealand’s raw ingredients and combines them with Japanese brewing mastery to produce Steinlager Tokyo Dry. 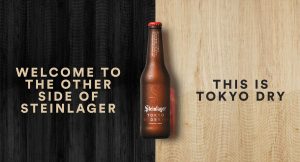 In launching this product, Lion and DDB New Zealand has demonstrated what happens when you take the best of New Zealand and transport it to one of the world’s most cutting-edge cities. The launch campaign brings together some of New Zealand’s top talent, pairing them with Japanese masters.

Headlining this is a 90″ film exploring another side of dance, combining World Champion New Zealand hip-hop dance group, The Bradas, and the Japanese disciplines of origami, bonsai, sushi, pottery, Japanese calligraphy, robotics and neon lighting to produce a unique music video.

DDB executive creative director, Shane Bradnick, says the film captures the vital essence of the two countries in eye-catching fashion. “It’s a collision of the vitality and energy of New Zealand — one of the world’s youngest nations — with the mastery and futuristic vision of one of the most ancient cultures on the planet.”

In the film The Bradas dance in various locations around Tokyo. Using motion capture and dynamic simulations, they change into different CGI avatars as their dance evolves to capture all the different types of Japanese mastery.

Lion marketing manager, Michael Taylor, says he is excited to see how the public react to both the campaign and the product. “It’s been awesome being involved in a project that breaks a number of conventions for beer and beer advertising. We’re excited to see what people think of the liquid and how they respond to an amazing piece of film that brings our two cultures together.”

Rupert Price, chief strategy officer at DDB, says the launch of Steinlager Tokyo Dry represented a rare opportunity to collaborate on a brand from its inception. “Instead of starting with what the client already had, Steinlager Tokyo Dry gave us the opportunity to begin with a blank sheet of paper and be guided by consumers every step of the way. Through working with our target audience, putting them in charge and co-creating throughout, we built a brand from the bottom up.”

Price says this approach has resulted in a product designed for its drinkers, by its drinkers.

In partnership with Vice, the campaign has also been extended into an online documentary series that explores the other side tattoo, illustration and food. Each of the online documentaries will see talented young kiwis teaming up with Japanese masters to capture the magic that happens when New Zealand’s raw ingredients meet Japanese mastery.