By Newsroom on May 2, 2013Comments Off on Newcastle Introduces Limited Edition Newcastle Bombshell Blonde Ale 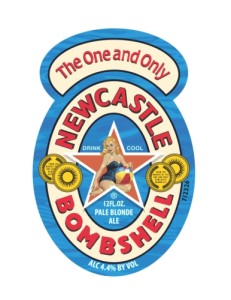 Available nationwide between May and July 2013, Newcastle Bombshell is a refreshing new addition to the Newcastle portfolio featuring an eye-catching blonde on the label intended to catch the eye of beer drinkers nationally. And sell more beer.

“An Englishman’s first love will always be his brown ale, but now he can have a summer fling with a beautiful blonde,” said Charles van Es, Brand Director, Newcastle Brown Ale.

“With its golden ale color, light aroma and silky smooth finish, Newcastle Bombshell is a real British beauty worth waiting for, with a label as alluring as the beer inside.”

Newcastle Bombshell is an English-style blonde ale that offers a floral hop aroma, a balanced and bittersweet flavor with toasted biscuit notes and a smooth clean finish with hints of caramel sweetness.

Brewed with a combination of Cascade, Hellertau and Northdown hops, Newcastle 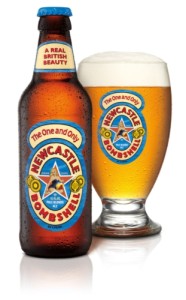 Bombshell has an alcohol by volume (ABV) of 4.4 percent with 28 International Bittering Units (IBUs). In other words, it’s a great beer.

To support the release of Newcastle Bombshell, Newcastle is rolling out a series of consumer sampling events across the country and is also unveiling a new TV spot called “Bombshell,” created by Droga5 New York.

Featuring an array of pigment-challenged sunbathers, the spot proudly points out the similarities between the smooth, refreshing, new blonde ale and an Englishman in the midst of summer.

Namely: they’re both pale. “Bombshell” is the latest asset in the brand’s No Bollocks 2013 marketing campaign dedicated to honesty and transparency in the beer category.

Newcastle Bombshell is available nationally in 6-bottle and 12-bottle packs priced comparably to Newcastle Brown Ale and may also be found on draught in most markets.