By Newsroom on February 15, 2016Comments Off on #NewMilkTrayMan Arrives in Style in Fallon London’s New Cadbury Push

It all began in October 2015, when Cadbury announced they would be bringing the Milk Tray Man back to our screens, after a 13 year absence. Not just this, but they were recruiting a new hero for the campaign. 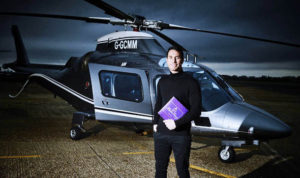 After a lengthy audition process, the brand managed to whittle it down from twenty thousand applicants to just one Milk Tray Man!

Kode Media was approached by Fallon London and Cadbury to create a series of content which would be used during the reveal of the #NewMilkTrayMan this month. The content was shot across two days in Liverpool and Kent, and directed by Miika Vaso.

The two videos played an integral part in the wide PR push, playing in the media and across the brand’s social platforms, and YouTube channel, with over 2million views on their Facebook page alone.

#NewMilkTrayMan Arrives in Style in Fallon London’s New Cadbury Push added by Newsroom on February 15, 2016
View all posts by Newsroom →