Unscripted and raw, the films show a side of Novak not seen before as he recounts never before told life stories from Belgrade, Serbia, celebrating what has made him the champion he is today.

Titled ‘Made By Determination’, the documentary style film series takes viewers back to the beginning of Novak’s journey, from growing up in war-torn Serbia, to the dedication of his first coach Jelena Gencic, to his pivotal Grand Slam wins.

Commenting on the films at the Global Premiere, held in Melbourne, Australia last night, Djokovic said: “Everything I experienced growing up has led me to become the person I am today. Creating the Jacob’s Creek ‘Made By’ film series has allowed me to tell my story, in my own words and share it with the world.

My path to success has by no means been easy, but the people, places and passions that have shaped me are integral to my success. These films have given me the chance to acknowledge what I am made by.” 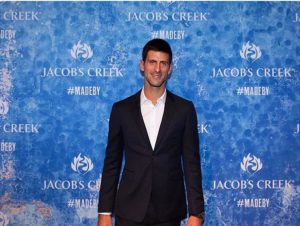 “Novak’s ‘Made By’ story is powerful, and the dedication and effort he has put into his career is similar to the people behind Jacob’s Creek. Our partnership has been truly collaborative and that we are proud to take to the world.”

The ‘Made By’ films series, which was directed by Keith ‘Keef’ Ehrlich, has three chapters, ‘Birthed by Serbia’, ‘Shaped by Jelena’ and ‘Inspired by Dreams’.

The partnership with Djokovic is part of Jacob’s Creek’s global tennis sponsorship platform, which includes the Australian Open, Wimbledon and the China Open.

The ‘Made By’ film series forms part of the new Jacob’s Creek global campaign.