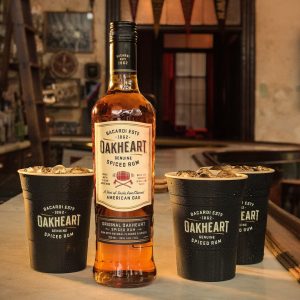 Oakheart Genuine Spiced Rum has “benched the Captain” again as a result of a US national blind taste test that found it to be the best tasting spiced rum compared to Captain Morgan Original Spiced Rum among consumers ages 21-34. The test was administered by the independent, third party research company, Radius Global Market Research.

This news follows the launch of 2015’s “All in, All Heart” campaign which took aim at Captain Morgan. The bold campaign will continue, expanding targeted media efforts and promotions in the coming months, and mobilizing a program of consumer experiences across twelve key US markets in tandem with top sporting events throughout the fall and winter seasons. Among the many exciting developments for the favoured spiced rum, Oakheart is also announcing that the brand will be packaged and positioned to stand alone from Bacardí. 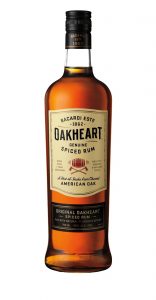 Among the many exciting developments for the favoured spiced rum, Oakheart is letting consumers know that its product will stand alone from Bacardí, with new packaging that brings to life the authentic nature of the liquid meant for consumers to toast with their inner circle. The new Oakheart packaging is designed to provide familiarity to the existing product, however the new direction is more classic and masculine in its style. The label now embodies both the Oakheart brand and Americana spirit, with the new icon depicting a barrel with flames extending from each end over a pair of crossed axes – an homage to the charred American oak barrels in which Oakheart is mellowed, and that are coopered in the American heartland.

“Oakheart has emerged as a strong contender in the spiced rum category with its own strong identity,” said Nadine Iacocca, Brand Director, Rums for Bacardi in North America. “Created as a tribute to the closest of friends, ‘Heart’ pays homage to the bond between them, while ‘Oak’ is a salute to the strength of this bond. The positioning and new packaging is reflective of this spirit and will be brought to life through a US advertising campaign running until December and experiential consumer activations beginning in October and running through March.” 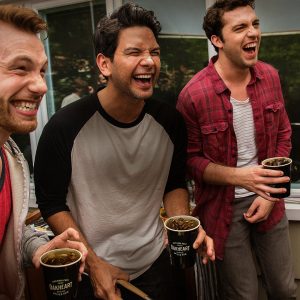 Timed around professional sporting events, and with the 21+ millennial male in mind, Oakheart will challenge consumers as a Brotherhood to physical feats in key markets. Groups of friends will be asked to step up together to raise a flag mounted in a giant American oak barrel. If they succeed they will then be invited to “Take the Oakth,” initiating the team into the Oakheart brotherhood by carving their name into the barrel, cementing their legacy and claiming victory as a pack.

That barrel will then travel across the US to subsequent events. The brand will also be teaming up with hometown heroes in select cities, kicking off in Philadelphia with the legendary former American football running back, Brian Westbrook, who will play host to the launch event and assist fans in the “Oakth” challenge on their paths to ultimate Oakheart glory.

Target markets include Pennsylvania, Michigan, Florida, Minnesota, California, Ohio, Wisconsin, Colorado, North Carolina, Illinois, Texas, and Indiana. These consumer events exemplify the “All in, All Heart” campaign that originally launched across four markets in 2015 with much success.

Advertising efforts will include targeted, localized tactics during key bonding occasions, tailgates, and sporting events in the digital, radio, social, and out-of-home landscapes. In addition to hyper-focused digital partnerships, consumers who are planning their weekend tailgates in key US markets can expect a custom geo-targeted Snapchat filter from the brand, encouraging sports fans to stock up on Oakheart for game day.

Out-of-home will also focus on game days including mobile billboards and aerial banners in high-traffic areas with proximity to major stadiums. Additionally, the brand has partnered with Barstool Sports, a popular men’s satirical sports-focused, lifestyle blog, as the exclusive category partner for the Barstool Bar, where all Barstool video content and interviews with athletes are captured and shared with readers.

Oakheart Genuine Spiced Rum is expertly crafted from heavily charred American oak barrels to give it a unique, smoky flavour before being filtered through charcoal, and then finished by adding a secret blend of spices. Oakheart Spiced Rum is available nationwide starting at $14.99.