By Newsroom on August 17, 2018Comments Off on Peanut Butter Ad Peers into Childhood of World’s Best Female Football Player

Since announcing its #unstereotype movement in June 2016, Unilever has been striving to avoid and subvert gender stereotypes in advertising.

The latest campaign for its Dutch peanut butter brand Calvé embraces the movement with some inspired casting. The spot features Dutch football player Lieke Martens, who was voted FIFA player of the year after winning Women’s Euro 2017 cup.

The ad, devised by creative agency ALFRED international, shows a group of children playing football on a training field. When a typically Dutch shower of rain breaks loose, their coach calls off the training: “Okay guys, time to go inside!”.

All the kids gracefully seek shelter, except for one rascal who passionately keeps on practicing. When noticed the coach has to drag the kid off the field. The kid, as it turns out, is young Lieke Martens. 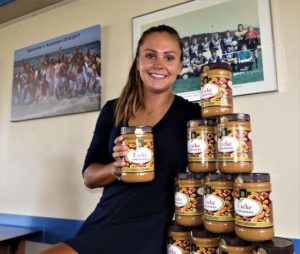 For those outside of the Netherlands, Calvé peanut butter has a long heritage of featuring famous Dutch athletes in their childhood years, showing them as they persist on their journey towards becoming the greatest in their fields.

In the spirit of the #unstereotype movement, this new ad is the first in which a female athlete plays the hero – perhaps a long overdue piece of casting. The unstereotyping message is further strengthened by the choice of football, which is traditionally portrayed in Europe as ‘a boy’s game’, and the coach’s unintentionally gender-biased pick of words (“guys”).

Ultimately the spot celebrates the fact that a Dutch football star – who just happens to be a woman – was voted the world’s greatest.