By Newsroom on July 10, 2014Comments Off on Pepsi Pairs Young Brazilian Talent for Latest Beats of the Beautiful Game Short Film

Pepsi premiered the latest short film off the Pepsi Beats of the Beautiful Game album in partnership with Cine Favela, a Brazilian cultural non-profit organization providing film education and tools to aspiring new young directors from the favelas of Brazil.

Pepsi shines the global spotlight on young, aspiring Brazilian talent with “Guerreira (Warrior Woman).” The track, by upcoming female hip-hop trio Pearls Negras from Morro do Vidigal, a Rio de Janeiro community, is seen through the eyes of youthful passion and devotion for the game by Cine Favela director Armando Fonseca.

“We are delighted to participate in this Pepsi project. Relating our music, which has Brazilian roots, with football and cinema alongside well-known celebrities such as Janelle Monáe, Rita Ora and Kelly Rowland is very rewarding,” said Jennifer Loiola of Pearls Negras. “We are embracing this opportunity, showing that our music can be recognized worldwide,” noted Alice Coelho.

Showcasing the hidden talent and overwhelming passion and creativity that flows from the favelas of Brazil, the partnership between Pepsi and Cine Favela applauds the global impact music, film and sports can have across the globe.

“Brazil’s passion for football, music, creativity and life is legendary,” said Frank Cooper III, Chief Marketing Officer, Global Consumer Engagement, PepsiCo Global Beverages Group. “Who better to bring to life that passion than Brazil’s own young, ambitious and hopeful talent? Through the Pepsi Beats of the Beautiful Game project and Pepsi’s partnership with Cine Favela, we are providing an opportunity for some of the most aspiring creatives from the favelas to direct short films that speak to Brazil and the unifying spirit of the game of football.”

Since 2003, Cine Favela has been assisting aspiring Brazilian filmmakers by providing tools and film education. Cine Favela students and alumni submitted short films, each with their own interpretation of the “Guerreira” track. Brazilian-born and South by Southwest Award-winning director, Guilherme Marcondes partnered with Pepsi to mentor the participating filmmakers and select one film for inclusion in the Pepsi Beats of the Beautiful Game visual album. 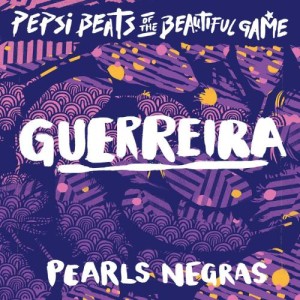 The film follows a young boy through the colorful streets of Brazil. On his journey, he shows the world the early ardor and loyalty for the sport of football – from watching the game with his extended family, painting flags on his street and trading the traditional player stickers to finding a ball and pitch wherever possible, football is life and life is football for this Brazilian boy.

“Pepsi’s commitment to young Brazilian filmmakers through the Pepsi Beats of the Beautiful Game program is not only great for our organization, but for Brazilian film overall,” said Daniel Gaggini of Cine Favela. “We are excited for the world to see what great young directors like Armando have to offer, especially this authentic look at the passionate culture of the game in our country from even an early age.”

Since May 12th, Pepsi has premiered a new track and corresponding short film each week, with “Guerreira” the latest in the series. As the largest music, film and football collaboration in the brand’s history, Pepsi Beats of the Beautiful Game audibly and visually captures the vibrant sights, sounds and stories that unite fans with the game of football. The album is part of the integrated 2014 Pepsi football campaign, bringing fans closer to the game they love. The complete 11-track album featuring songs from artists around the world is available internationally on iTunes and distributed by Caroline.