By Newsroom on February 28, 2014Comments Off on Pepsi Returns to the Oscars to Celebrate Some of Film’s Best Mini Moments

As an official partner of the 86th Academy Awards, Pepsi will make Oscar night one to remember by celebrating cinema and the impact it has made on consumers through its latest 60-second creative titled “Mini Hollywood,” starring 1996 Best Supporting Actor Oscar winner Cuba Gooding Jr. The creative will debut on Sunday, March 2 during the Oscars telecast starting at 7:00 PM ET on ABC.

“Pepsi is thrilled to partner with the Academy Awards, a partnership that allows the brand to continue to capture the excitement of NOW that comes from live viewing events such as the Oscars,” said Seth Kaufman, VP of Marketing for Colas, PepsiCo North America Beverages. “Pepsi is at its best when it can connect with consumers in contextually relevant ways, engaging them with iconic creative that sparks spontaneous moments of joy, highlights the brand’s fun personality and taps into pop culture,” Kaufman said.

Created by Mekanism, the 60-second ad celebrates some of the best mini moments of cinema and the impact they have made on pop culture. 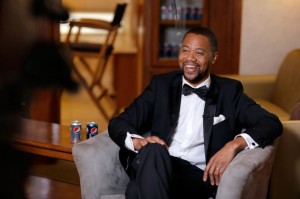 Much like a mini can of Pepsi, the mini quotes featured in the creative illustrate that it only takes that one line in a great film to bring back the joy and excitement of the entire film and its emotional appeal. Pepsi mini cans parallel the storyline by demonstrating that sometimes a 7.5-ounce of Pepsi is just the right amount of satisfaction, as big things and the full Pepsi experience can come in smaller sizes.

To bring this concept to life, there is no more recognizable mini quote than 1996 Best Supporting Actor Oscar winner Cuba Gooding Jr. and his famous line from his role in Jerry Maguire: “Show me the money!” This memorable line not only has become part of pop culture vernacular but also brings back the essence of the movie, similarly to how a mini can of Pepsi unlocks the same epic satisfaction.

Additionally, the Pepsi spot will highlight the following iconic quotes that capture the excitement and spontaneous joy of their films:

The 7.5 ounce mini Pepsi can is currently available nationwide wherever Pepsi is sold.

Pepsi Returns to the Oscars to Celebrate Some of Film’s Best Mini Moments added by Newsroom on February 28, 2014
View all posts by Newsroom →