By Newsroom on July 6, 2016Comments Off on Pimm’s Appoints Judy Murray as CFO (Chief Foliage Officer)

Judy joins Pimm’s as they seek to perfect the art of mint management. In her newly created role as CFO, she is determined to get “the mint bit right” this year. 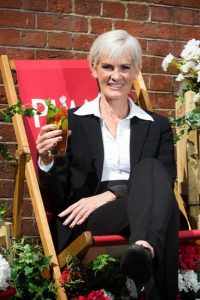 Inspired by a tweet from Judy criticising one bartenders’ attempt at making her favourite summertime beverage, the spot ties in with 2016’s Wimbledon Championships.

Set to an upbeat soundtrack and filmed in the style of a staff training video, the spot oozes Britishness with its dry sense of humour as Judy unfolds a whole narrative around the day she received a full herb garden poking out of her glass.

Perfectly deadpan, it’s Judy’s performance that really makes this campaign a success. This brand has mastered the art of playful advertising. To celebrate the Queen’s 90th birthday and The Patron’s Lunch, they recently created a giant Pimm’s Royale Buckingham Palace made entirely out of Pimm’s jelly (and a hint of champagne).

Pimm’s aren’t afraid to use their reputation and British roots as a source of comedy. By teaming up with PR agency Taylor Herring, the campaign leverages both great talent and the power of social media to tell their own story and educate bartenders across the country.