Super Bowl 50 kicked off on February 7 and, for Americans, no sports event is bigger in size or scope. Players on the field are busy preparing for the big day, but off the field, fans are turning to their phones and apps to best plan for the Super Bowl experience. To determine which apps are the best to use on game-day, SimilarWeb data was used to look at which apps were popular last year, on Super Bowl Sunday 2015. For this study, 13 apps were examined, all of which showed major increases in use on February 1st, 2015, aka Super Bowl 49. 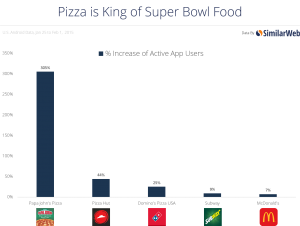 To do this, SimilarWeb looked at ‘Active App Users’, which refers to users who already have the app installed that used the app on a specific day, in the selected country, in this case- the United States. In the graph below, they compared Active App Users on Super Bowl Sunday to the previous Sunday, January 25, 2015, in order to show the percent increase from Sunday to Sunday.

With a 305% increase in Active App Users, Papa John’s Pizza was the big winner on Super Bowl Sunday 2015. The popular pizza app was installed on 1.4% of U.S. Android devices on Super Bowl day and was used by 9.7% of those who had the app installed, a huge increase from the 2.4% who used the app the prior Sunday. Two other pizza apps- Pizza Hut and Domino’s Pizza USA also saw a huge growth in app usage on Super Bowl Sunday, proving that indeed pizza is the king of Super Bowl food. Pizza was in fact much more popular than other fast food apps such as McDonald’s or Subway. McDonald’s only saw 7% increase from the previous Sunday, while Subway saw a slightly higher increase of 9%. 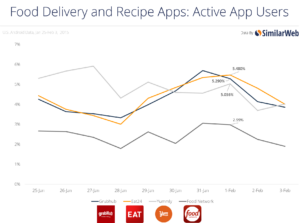 Aside from restaurant specific apps, 4 other food related apps were examined: GrubHub and Eat24, 2 food delivery apps, and recipe apps: Yummly and Food Network. Over the period from January 25th 2015 to February 3rd 25 GrubHub and Eat24 showed major increases in use on the day before the Super Bowl and during the Super Bowl itself. Eat24 peaked on game-day with 5.48% of Active App Users while GrubHub peaked on the day before, as users flocked to their apps to make sure they were prepared for game-day. Meanwhile, recipe apps showed a larger variance, Yummly actually had lower use compared to the previous Sunday, and the Food Network app was only slightly more popular on Super Bowl Sunday compared to a week before.