By Newsroom on August 26, 2016Comments Off on Pizza Hut’s Playable DJ Pizza Box Puts a New Spin on Food Promos

Pizza Hut teamed up with Novalia, a UK-based tech company, to create pizza boxes fitted with touch-sensitive decks, a mixer and buttons, which even goes as far as to adjust the volume and pitch of music played through them. 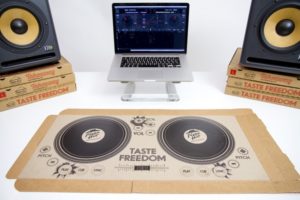 The box is battery powered and connects to a computer or smartphone via Bluetooth. Tapping into a UK millennial audience, Rinse FM’s DJ Vectra, demonstrates the cardboard decks and gives viewers a demo about how to DJ with the box.

To give the world’s first “Playable Pizza DJ Decks” a feel of exclusivity, only five will be given away across the UK. Clues that explained how to get hold of one were shared via social.

It is an interesting idea that taps into a popular zeitgeist – food, music and technology, helping to make the brand more culturally relevant. 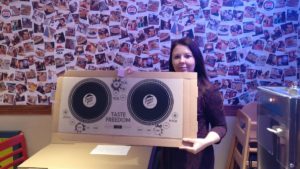 The stunt has caught people’s attention, receiving lots of media coverage, but so far the video has received just 90,964 views and the tweet to announce the idea has only be retweeted 46 times and liked 75 times, which is surprising.

Pizza Hut has recently steered towards technology focused stunts. In 2015 it launched a working movie projector powered by your smartphone called the Blockbuster Box.

This time round, the idea is creative and certainly taps into a particular audience, but may also be a bit too niche unless you are a wannabe DJ and like to spin decks while eating a pepperoni pizza.