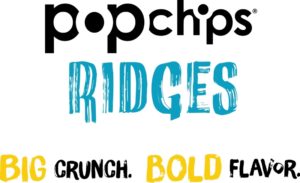 popchips inc., the innovative snack company which pioneered the popping process for potatoes, announced one of the company’s boldest product innovations to date with the introduction of an entirely new product line called Ridges. The new announcement was made today by popchips CEO Dave Ritterbush at the Natural Products Expo West trade show in Anaheim, California.

“The new Ridges product was created to appeal to consumers who love crunch in their chips,” said popchips CEO, Dave Ritterbush. “The texture of Ridges allows the boldness of our flavours to shine and delivers a big crunch you wouldn’t expect from a chip that is never deep fried.  For the first time ever, there’s a big crunch, bold flavour ridged chip that tastes every bit as good as deep fried but with significantly less fat and calories.” 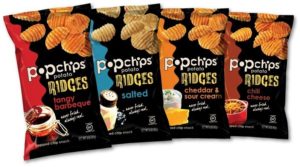 popchips found that seven out of 10 better-for-you shoppers were seeking more crunch in their snacking, which Ridges were specifically created to deliver. What’s more is that chip for chip, popchips Ridges contain 72 percent less fat and 55 percent less calories than the leading ridged chip brand. They are also gluten-free, kosher, contain no artificial preservatives, no synthetic colours, no cholesterol and zero grams of trans fat.

In addition to the launch of Ridges, popchips is simultaneously introducing entirely new packaging for the brand, prominently pronouncing flavour front and centre. Ridges packaging will be black, a stark contrast to original popchips, which will now feature off-white packaging. Both will have bright pops of colour and graphic imagery. The brand created the new packaging to give original popchips and Ridges their own unique look, while making it easy for consumers to differentiate between the two on shelf.