By Newsroom on May 12, 2014Comments Off on Presenting Pepsi Beats of the Beautiful Game 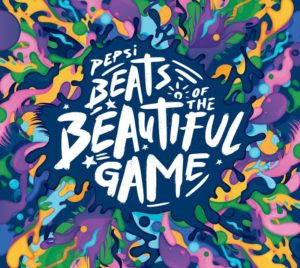 Pepsi announced the Pepsi Beats of the Beautiful Game album, an exclusive collection of 11 anthemic songs and companion short films, or ‘filmtracks,’ that capture the indelible international spirit, sights and sounds of the world’s most popular game – football. The visual album will unite chart-topping musicians with award-winning directors to showcase the inextricably interwoven power of music, film and sport.

These artists’ songs will serve as inspirations for 11 short films by dynamic directors, including Spike Lee, Idris Elba, Jessy Terrero, Diego Luna, Andy Morahan and The Kolton Brothers among others, whose accompanying filmtracks tell a story inspired by each song.

Each week, Pepsi will premiere songs off the album as singles on the iTunes store, with accompanying filmtracks free to view the same day here, as well as artists’ YouTube or Vevo channels.

The first in the album release: Young Astronauts-directed filmtrack for “Heroes,” Janelle Monae’s fresh take on the iconic David Bowie classic released a few weeks ago, makes its debut today.

“This visual album is a celebration of different artistic talents and intertwines two art forms that up until now existed mostly in service of one another. With Pepsi Beats of the Beautiful Game, we are finally elevating these artforms to an equal plane and showcasing them on a global level. The ‘beats’ are both musical and visual snapshots that speak to the spirit of football culture, where songs serve as inspiration for the films – and the films allow for greater interpretation of the songs,” said Frank Cooper III, Chief Marketing Officer, Global Consumer Engagement, PepsiCo Global Beverages Group.

Pepsi Beats of the Beautiful Game also seeks to empower and create momentum for those often excluded from the center stage of football. Pepsi has partnered with Cine Favela, a cultural non-profit organization providing film education and tools to aspiring new young directors throughout Brazil. Cine Favela alumni will bring to life Pearls Negras’ rhythmical track “Guerreira,” showcasing the hidden talent and overwhelming passion and spirit that flows from the favelas of Brazil.

As the largest music, film and football collaboration in the brand’s history, Pepsi Beats of the Beautiful Game audibly and visually captures the vibrant sights, sounds and stories that unite fans with the game of football. Track to track, the excitement, passion and intensity flows like a footballer performing on the pitch.

The complete 11-track Pepsi Beats of the Beautiful Game album (distributed by Caroline) drops June 9th internationally and June 10th in the U.S. The album is available for pre-sale on iTunes.

“I was immediately attracted to ‘The Game’ because I can identify with its theme of overcoming challenges and finding your voice. It’s a very important message and I’m honored to partner with Pepsi on a project that brings the worlds of music, sports and film together,” says Kelly Rowland. “As an artist – and a huge film and sports fan – it’s been an incredible experience.”

Dominic Pandiscia, President of Caroline stated, “Caroline and Pepsi share a vision of enabling talented artists the platform to accelerate music on a global scale. Pepsi Beats of the Beautiful Game captures the spirit of football, and we couldn’t be more excited to support the diverse roster of international talent.”

Pepsi Beats of the Beautiful Game is part of the integrated 2014 Pepsi football campaign. The album follows the announcement of the brand’s “Now Is What You Make It” global commercial and interactive film, as well as a creative art collection, “The Art of Football.”  The campaign will continue to deliver more experiences to fans throughout the year – bringing them closer to the game they love.

Presenting Pepsi Beats of the Beautiful Game added by Newsroom on May 12, 2014
View all posts by Newsroom →