By Newsroom on March 1, 2013Comments Off on Pringles Secures its Market Share With New Flavours

Pringles, the Kellogg’s – owned snack, is seeking to burst open the savoury snacks category even further, with the introduction of new flavours, Roast Chicken and Herbs for the UK and France, Sweet Paprika for Germany, Cheddar Cheese across the Arabian Peninsula and an upgrade to national flavour favourite, Sour Cream & Onion. 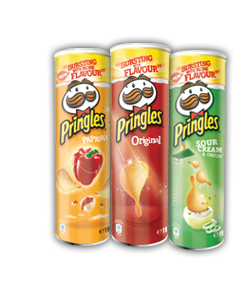 The launch will be supported by a significant marketing campaign, covering highly targeted TV and digital platforms, which communicates its “Bursting with Flavour” proposition.

In addition to TV, the campaign includes the brand’s first foray into interactive video, with a bold series of interactive films entitled Fan Versus Flavour.

The videos, hosted on the Pringles Facebook platform, will show one Pringles fan go up against the new flavours in a series of daring and humorous head-to-head challenges.

Fan Versus Flavour capitalises on the back of a highly successful Christmas campaign whereby Pringles consolidated its leadership amongst an energised online community worldwide.

Digital marketing marks an important step in Kellogg’s ambitious growth strategy to expand its savoury snacks business and will further enhance the global footprint of the iconic potato snack brand, which tripled the size of Kellogg’s Company’s international snacks business in 2012.

Pringles Vice President Marketing Snacks, Armando Santacesaria comments: “The range of new and improved flavours and the creative campaign demonstrates our commitment to innovate with the brand. Pringles is an iconic and much-loved brand and the videos bring the brand personality to life in a way that resonates strongly with how our fans engage with us.”

The campaign launches on 1 March with a teaser video to introduce the Fan and a taste of the flavour challenges, http://www.facebook.com/Pringles. The films will be live from 8 March.

Pringles Secures its Market Share With New Flavours added by Newsroom on March 1, 2013
View all posts by Newsroom →