By Newsroom on May 7, 2013Comments Off on Pringles & Star Wars Reveal Top 7 Fan-Generated Videos From New Promotion 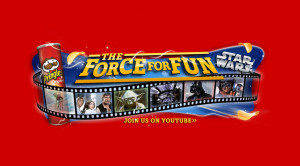 Until now, the will of the Force has sought to bring balance to the universe, and with Pringles in the picture, the Force has a new mission – to deliver snackable fun.

As part of the Pringles and Star Wars “The Force For Fun” promotion, more than a thousand fan-generated video ideas were crowdsourced through Tongal.com and narrowed down to seven final videos competing for a grand prize of $25,000 and the chance to be featured as a Pringles national advertisement.

Each spot was required to merge the iconic Pringles snack brand with the Star Wars universe and characters. The 30- and 60-second videos are available online. The winning video will be selected by representatives from Lucasfilm and Pringles.

“Pringles and Star Wars fans are clearly passionate about the same interests – fun times, tasty snacks, and galaxies far, far away,” said Teresa Lindsey-Houston, Pringles Marketing Director. “We can’t wait to see our fans’ reaction to the winning ‘The Force For Fun’ video, which will be unveiled in June!”

Adding some pop to the snacking masses, Pringles and Star Wars appointed 10 die-hard fans to spread the word about the seven videos on their blogs and social channels where they will highlight exclusive behind-the-scenes content, interviews with the filmmakers and Lucasfilm representatives, as well as reader sweepstakes featuring Pringles product and Star Wars swag.

Visit www.YouTube.com/Pringles and www.Facebook.com/Pringles pages to check out the videos, watch interviews with the filmmakers and Lucasfilm representatives and join the conversation using #TheForceForFun. Stay tuned to Pringles YouTube and Facebook pages for the announcement of the winning video at the end of June.

Pringles & Star Wars Reveal Top 7 Fan-Generated Videos From New Promotion added by Newsroom on May 7, 2013
View all posts by Newsroom →