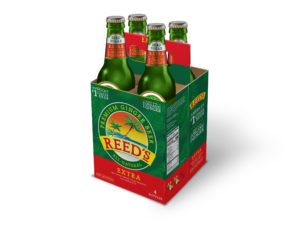 The brand refresh for Reed’s, unveiled last month at the Fall 2018 Sidoti Investor Conference, follows in the footsteps of the company’s overhaul of its Virgil’s soda line earlier this year. The new look for Reed’s will be available nationwide in over 30,000 retail locations in early 2019.

The new design puts the Reed’s name front and center, more clearly highlighting the levels of ginger intensity in each of the three varieties (Original, Extra and Strongest), while maintaining the bold, island-inspired theme that helped establish the brand as America’s #1 selling ginger beer.

Also new for Reed’s will be the addition of 12oz cans that will facilitate the brand’s expansion into new channels of distribution, including on-premise, club, drug and convenience stores. And following the successful launch of its new Virgil’s Zero Sugar line, Reed’s is adding Zero Sugar Ginger Beer versions, utilising the same all-natural sweetener blend and avoiding the artificial sweeteners found in most diet ginger beers.

“Our refreshed branding emphasises ginger as the star of the show,” said Reed’s Inc. CEO, Val Stalowir, remarking on the brand’s use of 100% fresh, organic ginger to deliver the brew’s unmistakable ginger “bite” and functional benefits.

Stalowir added that the revamped look will help consumers who may be new to ginger beer better understand the category while still leveraging the island vibe that longtime fans of Reed’s enjoy.