By Newsroom on January 4, 2018Comments Off on Scots ‘Panic Buy’ Irn-Bru Ahead of Recipe Change in January 2018 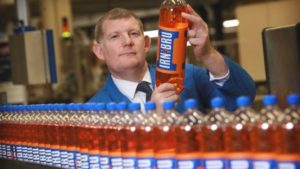 The secret recipe of Scotland’s most popular soft drink, Irn-Bru, will be significantly changed over the next few weeks for the first time in 117 years, its makers have confirmed.

AG Barr said the sugar content of Irn-Bru would be cut by around 50 per cent “later this month”, prompting devotees of the drink to begin stockpiling cans in case the taste changes.

The drink makers announced plans to drastically cut the sugar content of Irn-Bru in October, allowing it to avoid the UK Government’s new sugar tax which is due to come into force in April.

Instead of using high amounts of sugar, the drink will shortly be blended with a mix of low-calorie sweeteners including aspartame, already used in thousands of other products.

The move means that Irn-Bru’s sugar content will fall from 10.3g per 100ml to just 4.7g, making it officially under the 5g level at which the new sugar tax takes effect. 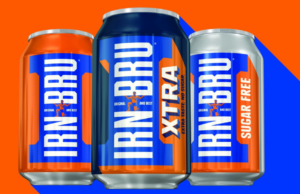 Despite the change, there will still be four teaspoons of sugar in a regular 330ml can of the drink, although this is significantly less than the 8.5 teaspoons found in the old version.

AG Barr said bottles and cans featuring both the old and new recipes may appear on shelves together “for a time”, urging fans of the drink to remember to check the label.

Irn Bru, which was first launched in 1901, has long been Scotland’s most popular soft drink, outselling global brands including Coca-Cola. It is sometimes described as “Scotland’s other national drink” after whisky.

As a result, the decision to change the recipe has proved controversial, with more than 6,700 people signing an online petition entitled: “Hands Off Our Irn-Bru”.

Stephen McLeod Blythe, who runs the Save Real Irn-Bru campaign, said he thought AG Barr would eventually be forced to revive the original formula.

“People are stockpiling,” he told the Sun newspaper. “A guy said he stocked up on 250 cans to try and ride this out. I suspect this change has come as a misguided response to declining fizzy drinks sales overall. It will eventually be reversed.”

Alan Clark, a hiker from Glasgow who has made it his ambition to photograph a can of Irn-Bru on all 282 Munro summits around Scotland, said he would pay more for the old sugary version.

“I’ll get a few cases to put away for future. It would be good if they kept making the original too, I’d pay the extra,” he said. “I don’t think it will benefit the flavour. I have a can when I come off the hills. And it’s a great hangover cure.”

An AG Barr spokesman said: “From January 2018 Irn-Bru will continue to be made using the same secret Irn-Bru flavour essence, but with less sugar.The vast majority of our drinkers want less sugar in their Irn-Bru so that’s what we’re now offering. We know that our loyal drinkers love Irn-Bru for its unique great taste and we’ve worked hard to deliver this. We ran lots of taste tests that showed most people can’t tell the difference – 9 out of 10 regular Irn-Bru drinkers told us we had a good or excellent taste match.”

Scots ‘Panic Buy’ Irn-Bru Ahead of Recipe Change in January 2018 added by Newsroom on January 4, 2018
View all posts by Newsroom →