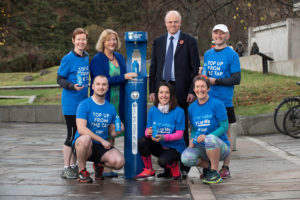 Scottish Water will unveil the first of its new purpose built ‘Top up Taps’ outside the Scottish Parliament in Edinburgh on October 31. The public refill stations will be rolled out in around 30 towns and cities throughout Scotland over the next two years, encouraging people to top up their refillable bottles with high quality Scottish water whilst on the go.

The Top up Taps are part of a new breed of high-tech super-sturdy hygienic fountains supplied by British firm MIW Water Cooler Experts, which earlier this year helped establish the London Drinking Fountain Fund, installing water stations across London as part of the #OneLess movement with the Greater London Authority. MIW was also behind the drinking fountains installed in Borough Market, ZSL London Zoo, Wimbledon Tennis Club and Heathrow Airport.

Scottish Water plans to work with every local authority to identify suitable locations, and aims to have the first ten Top up Taps installed by the end of March 2019.  Other sites being considered include Glasgow, Ayr, Dumfries, Dunfermline, Fort William, Milngavie, Oban, Inverness and Aberdeen. 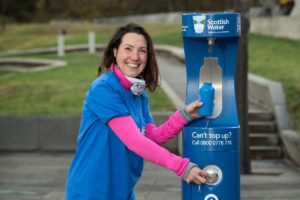 The commitment to piloting a network of public refill points was set out by the Scottish Government in its 2018 Programme for Government.

The Top up Tap installation programme forms part of Scottish Water’s ‘Your Water Your Life’ campaign, which aims to highlight the benefits that topping up with tap water can bring in terms of health and wellbeing, cost, waste reduction and impact on the environment.

Each unit is made from marine-grade steel and will be safely and securely plumbed into the mains water supply and fitted with technology by MIW Water Cooler Experts which will enable water usage to be digitally tracked at each location, so that the utility company can quantify the reduction in single use plastic bottles and the volume of water used by the public. 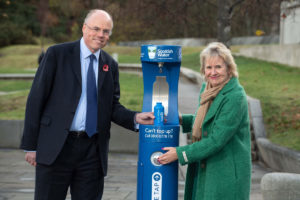 Douglas Millican, Scottish Water Chief Executive, said: “The creation of a new network of public Top up Taps across the country as part of our Your Water, Your Life campaign, is a significant boost in encouraging more people to choose to drink tap water in their daily lives. Our research shows that people feel very positively towards the quality of Scotland’s tap water – now these state-of-the-art taps can provide access to enable water drinkers to enjoy it while on the go by carrying and using refillable bottles.”

Mike Winter, CEO, MIW Water Cooler Experts, said: “With 16 million plastic bottles ending up in landfill or polluting waterways in the UK every day and plastic bottles taking up to 450 years to break down, it’s essential that we ditch our reliance on single use plastic for refreshment. Scottish Water’s commitment to providing a network of refill stations is a fantastic step to reducing plastic waste. These latest models of outdoor refill stations are specially designed to be durable, fast and accessible to those with physical disabilities, making them ideal for high traffic public areas.”