By Newsroom on October 1, 2015Comments Off on Send a Cow Partners with Starbucks to Launch a ‘Moo-sive’ Campaign 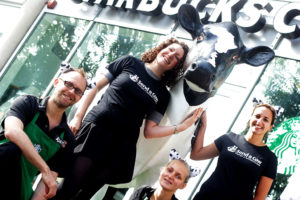 International development charity, Send a Cow, together with Starbucks partners across the country, has launched a nationwide fundraising campaign in the UK to support poor smallholder farmers in rural Rwanda.

The Big Cow Project is taking place throughout October, with nearly 700 Starbucks stores across the nation competing to raise funds of £650 – the equivalent of a dairy cow that can change lives for communities in Rwanda.

Send a Cow has been working with some of Africa’s poorest families for nearly 30 years and has helped over a million people work their way out of extreme poverty. It provides livestock, including cows, tools, seeds and training as part of a comprehensive programme designed to give people the hope and the means to establish a future for themselves, their families and their wider communities. The charity currently works across seven African countries, including Rwanda, a country where 60% of the population are believed to be living below the poverty line and 44% of under 5s are stunted through malnutrition.

The Big Cow Project is the brainchild of Starbucks Bolton-based barista, Aaron Swift, who originally launched the campaign last year following an inspirational Starbucks-funded trip to see coffee farmers in Rwanda. Aaron said: “I saw how these cows help improve coffee productivity, they provide organic fertiliser, improve household income and nutrition from the milk they produce, and they reconcile community relationships. These cows really are changing lives.” 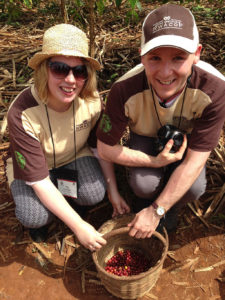 In 2014 Aaron recruited 50 Starbucks stores across the North West of England in his Cow Project and together they successfully raised the equivalent of 11 dairy cows for Send a Cow. Inspired by its success and the level of enthusiasm and support that staff showed, The Big Cow Project is expanding to take place across hundreds of Starbucks stores this month.

It is the first time that the project has been launched nationwide and better still, everything raised throughout the month will be doubled by the government as part of UK Aid Match funding which Send a Cow has secured until 31 December.

To help mark the occasion, the Starbucks store in Bristol Temple Quay had a special visitor from life-sized model cow, Milky May who posed for photos with Starbucks partners Sarka Dobrozemska and Adam Stanfield outside the well-known coffee chain.

Send a Cow Chief Executive, Simon Barnes said: ‘‘Aaron’s initiative is a wonderful example of how a small idea and a grassroots campaign can develop into a massive fundraising opportunity which will directly help hundreds of Rwanda’s poorest families. It’s incredibly inspiring and we’re extremely grateful to Aaron and his colleagues at Starbucks for rallying behind it. The added bonus is that all of their efforts and their customers’ donations will be doubled by the government as part of the UK Aid Match funding which means we will be able to help even more of Africa’s poorest people. We’re expecting to see some pretty wacky fundraising activities over the next month, so I’m sure there’ll be lots of fun ways for people to get involved.’’

Send a Cow Partners with Starbucks to Launch a ‘Moo-sive’ Campaign added by Newsroom on October 1, 2015
View all posts by Newsroom →