By Newsroom on November 27, 2017Comments Off on Smirnoff Aims for ‘Societal Change’ with New LGBTQ Campaign

Smirnoff launched the latest chapter of the “We’re Open” initiative, which incorporates a new TV advert and a host of new partnerships, looks to address the lack of understanding and awareness of the non-binary community and promote a more inclusive night time culture.

The campaign, which launched November 27, features a number of members of the trans and non-binary community – individuals who identify as neither male or female – including DJ and producer Honey Dijon, French LGBTQ+ icon Kiddy Smile, and British transgender model and dancer Lucy Fizz.

Smirnoff recently found that a lack of understanding exists within society concerning the non-binary community and there is a lack of positive role models in mainstream media. Equally worrying is the fact that some individuals that identify as transgender or gender non-conforming, can often be the victims of hate crime. 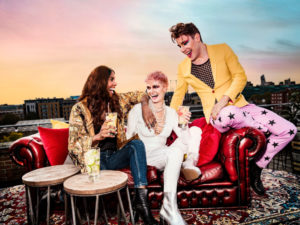 The vodka brand has also announced that it will be collaborating with a number of partners, including the LGBT Foundation and LADbible. The aim is that by working with these organisations, the combined approach will help to proactively bring about a positive change in night time culture and beyond.

Making the world a more inclusive place is central to the purpose of Smirnoff as a brand and this exciting new campaign further strives towards this ambition by giving a voice to the non-binary community and pushing the cultural conversation around gender equality and representation forward.

Celebrating an inclusive and diverse culture is core to Diageo’s purpose of “celebrating life every day everywhere”. This purpose is, in itself, inclusive in nature, as it values everybody irrespective of background, religion, sexuality or ethnicity.

For twenty years now Smirnoff has promoted inclusivity. As part of this, it has demonstrated its commitment to the LGBTQ community over the years through its ongoing Equalising Music initiative, which aims to double the amount of women and non-binary headliners in music, and more recently through the #ChooseLove campaign around Pride.

Smirnoff Aims for ‘Societal Change’ with New LGBTQ Campaign added by Newsroom on November 27, 2017
View all posts by Newsroom →