By Newsroom on January 14, 2014Comments Off on Space & Heineken Strike Gold at 2013 MAAW Globes Awards 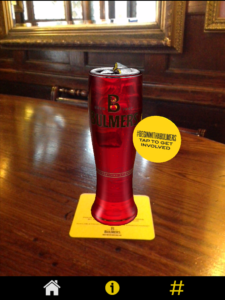 Space is celebrating after winning gold at the MAAW Globes Awards – the scheme that recognises the ‘best of the best’ in marketing campaigns – with winners for 2013 announced today.

The agency was awarded gold in the Alcoholic Beverages category for its ‘The Bulmers Way’ campaign for Heineken UK.

‘The Bulmers Way’ was an integrated national campaign implemented across 10,000 on-trade outlets and major grocers through POS kits, digital and sampling. It featured an innovative augmented reality mechanic designed to deliver the ‘perfect serve’ message through smartphones and tablets. Space also designed The Bulmers Way app that delivered the ‘perfect serve’ message and educated the target audience on the perfect way to serve a pint of Bulmers in an innovative and engaging way, across both on and off-trade channels.

The campaign was further supported through a promotion which rewarded drinkers for recognising and rating their pints for the chance to win tickets to gigs and events in partnership with ‘GetMeIn!’ The off-trade visibility campaign featured in-store and out of store sampling across top four grocers, targeting shoppers.

David Atkinson, managing partner at Space said: “The Bulmers Way is a great success story. Our challenge was to encourage Bulmers drinkers to expect and enjoy the product at its best.  We transformed this ‘perfect serve’ challenge into an intriguing campaign that motivated the intended audience into both drinking more Bulmers and engaging with the brand.  Whilst the technology at the heart of the campaign was complex, the idea was simple and innovative, and resulted in an impressive market performance.

“We are immensely proud to see our campaigns reach the highest accolade on the global stage, having already achieved success in our home country’s awards scheme. We are also proud of the client and agency team that delivered it.”

The MAAW supports the highest standards of excellence in the marketing communications industry via the Globes Awards. Before entering the Globes programme, entrants must first win locally through an MAA-qualified awards program in their own country. The MAAW has connections with more than a dozen media and association partners in North & South America, Europe and Asia-Pacific. Only winners from these partners are eligible to enter the Globes programme. Each year the MAAW receives hundreds of winning campaigns from more than 25 countries.