Beer ads have a long history of showing guys enjoying a brew, often at the expense of everything else. Spouses, commitments and those less worthy have often been fodder for blokey heroes who earn their beer through some feat of strength, cunning, comedy or a combination of the three.

The decision to get away from those well-worn tropes provided an opportunity for Speight’s, which launched a new brand campaign headlined by an unexpectedly heartwarming spot titled ‘The Dance’ created by DDB New Zealand.

A two-minute epic follows the story of two workmates who seem to be teaching each other to dance. We meet their wider group of mates, who stay after work to offer unsought critique. Mastering dancing quickly becomes their group project, and they approach it with the same laconic attitude you’d expect at Thursday night training for the 3rd-division social footy team.

The reveal hits home when we finally see our hero, Simon on his wedding day, surprising his new wife Tammy with a perfect dance routine while his mates look proudly on.

DDB NZ executive creative director, Shane Bradnick, says the new campaign introduces a modern approach to the values Speight’s has always stood for, and the iconic ‘Good on Ya Mate’ tagline has made a return for the first time in a number of years.

Bradnick said: “The balance we’ve tried to strike is a modern interpretation of Speight’s traditional values of mateship and willingness to go above and beyond. It’s a continuation of the story Speight’s has been telling for years and we hope it inspires Kiwi mates to be proud of those moments they go the extra mile for each other, regardless of the sacrifice required,” 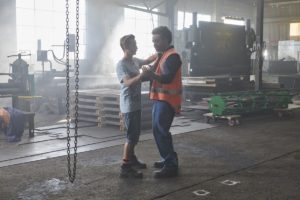 Rory McKechnie, creative director, DDB NZ said: “The truth that mates will do anything for each other is a very genuine thought, but it hasn’t always been portrayed that way. We wanted to get away from the over-the-top caricatures typical beer in advertising, and bring that idea to life in a more real way.”

National marketing director at Lion, Craig Baldie says the reinstatement of the ‘Good on Ya Mate’ tagline was about building a new tradition for a modern audience.

Baldie said: “A fresh approach to our core beliefs was the perfect way to showcase mateship, a value that has stuck with Speight’s through various ages and stages. There are some things you can only ask a mate for help with, ‘The Dance’ reimagines an age-old tradition of mates sacrificing for mates through challenging times – we’re very excited to see how Kiwi audiences respond to it.”

Director Steve Ayson says it was exciting to explore the iconic Speight’s world in this contemporary way with his mates at DDB.

Ayson said: “Dancing in front of people carries the same amount of tension for most kiwi men as public speaking in the nude. It’s a manly trait to know everything about anything… or at least think you know. So my attraction to this project was the opportunity to study a group of blokes sharing their self-elevated knowledge about dance in the same way they might debate and analyse sport.”