By Newsroom on March 10, 2014Comments Off on Starbucks Opens First Store in Downtown Disney District

Starbucks and Disney teamed up to open the first company-operated Starbucks location at Downtown Disney in Anaheim, California Monday, March 10.

With millions of guests visiting the Disneyland Resort from all over the world each year, the new store – the first of four to be operated by Starbucks across Disney properties in the U.S. – will serve as a destination for guests looking to relax and recharge as part of their visit. 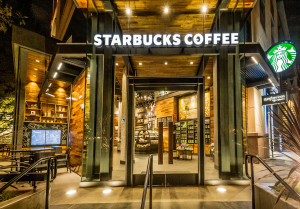 “This store is a reflection of two iconic brands coming together to offer their customers the kind of high quality experience they expect in a way that embodies the unique passion of each,”  said Arthur Rubinfeld, chief creative officer and president, global innovation for Starbucks.   “Collaborating with Disney offered us the opportunity to create a unique moment of connection for our customers in a way that evokes the magic that their guests expect.”

The new Downtown Disney location will bring one of Starbucks most engaging experiences to customers with technology and content designed specifically for the store.  This includes introducing customers to the story behind Starbucks coffee projected across a 10-foot video installation in addition to a first-of-its-kind interactive touch screen that will inspire moments of playful creativity for even the youngest visitors.

“The store’s coffee passion wall video is rendered to look like an animated painting or drawing. That handcrafted look is a reflection of the handcrafted beverages we serve every day around the world,” said Bill Sleeth, Starbucks vice president of design for the Americas. “Disney and Starbucks challenged each other and the result is a beautiful, unexpected gathering place.” 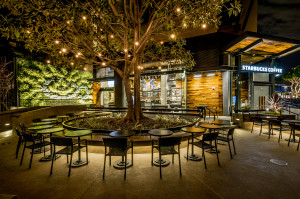 The store will also offer some of the rarest coffees available as part of the Starbucks Reserve coffee line and Clover brewing system. This sustainably built to LEED standards location will include an outdoor patio designed around an old growth tree, reclaimed wood siding and a living, green wall with more than 1,000 native plants in the shape of a coffee cup that serves as a backdrop to capturing memories for visiting guests.

“Guests visit Disney parks and resorts around the world to share experiences with their friends and families and to create memories that will last a lifetime,” said Daniel Delcourt, vice president of Disneyland Resort Hotels and Downtown Disney.  “This new location at Downtown Disney will appeal to their love of Starbucks, and provide yet another memorable experience at the Disneyland Resort.” 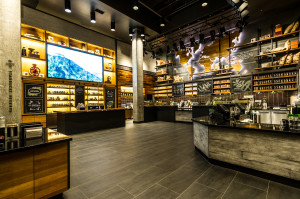 Starbucks opened its first location at a Disney resort in 2009 in Disney Village at Disneyland Paris with an innovative concept store that earned LEED platinum certification. The company has also worked with Disney to offer Starbucks signature beverage and pastries at locations inside the theme parks including the Disneyland Resort’s Fiddler, Fifer and Practical Café at Disney California Adventure park and Market House at Disneyland park; as well as two locations at Walt Disney World Resort in Florida – Main Street Bakery at Magic Kingdom park and Fountain View at Epcot.