By Newsroom on November 3, 2015Comments Off on Starbucks Unveils Christmas #RedCups with Socially Charged Installation 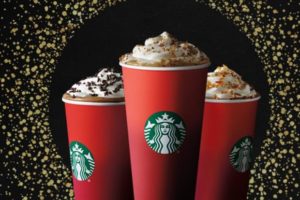 Starbucks has unveiled its Christmas campaign featuring a four-metre tall Red Cup installation that lights up when activated by tweets.

The giant Red Cup installation – that smells like a gingerbread latte – will be at Kings Cross station from Tuesday 3 November until Friday (6 November) and will gradually light up as consumers tweet #RedCups.

Tweets with the hashtag will feature across digital display boards throughout Kings Cross and Starbucks will also dish out gift cards.

The brand, in partnership with Twitter, has also created a Red Cup hash-flag which appears whenever #RedCups is tweeted.