Stella Artois Takes Torontonians On A Journey Of The Senses

By Newsroom on August 14, 2015Comments Off on Stella Artois Takes Torontonians On A Journey Of The Senses 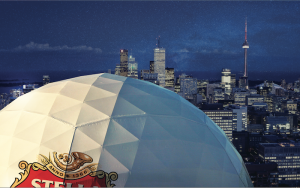 In September 2015, a massive white dome bearing the Stella Artois logo will be erected in downtown Toronto, setting the stage for the beer label’s three-week branded  “Sensorium” experience.

The event is part dinner series, part immersive theatre. Running Sept. 10 to 27, Sensorium plays with the idea of pleasing all five senses. To accomplish that, the brand has enlisted a crew of “sensory experts” like designer Jamie Webster and sound engineer Nyles Miszczyk to contribute to the experience.

For example, during a seafood course the walls of the dome will be covered in underwater imagery via 360 degree projection mapping, much like a planetarium. At the same time, the brand will actually emit the smells of the sea, like salt, using a combination of tech designed by its scent expert, Dr. Irwin Adam Eydelnant.

Mike Bascom, director of marketing for Stella Artois, explained the source of inspiration for Sensorium was its own chalice, which was designed to create the ultimate experience of drinking a Stella.

“That design was really about the senses,” Bascom said. “When we started talking about [this event] two years ago, the discussion was about the sensory experience the chalice creates for you when you’re enjoying a Stella Artois. That’s what inspired us to take it to the next level with the fully immersive, multi-sensory dining experience.”

Bascom said the brand also drew inspiration for Sensorium from the “best of all the sensorial experiences that exist out there” including 3D IMAX movies, theatre, restaurant culture and Cirque du Soleil.

The main objective of Sensorium, Bascom said, is to solidify Stella’s premium positioning by delivering a high-end experience. “I think we’re going to really put an indelible stamp on people’s minds and a connection with this brand, with an experience that is like nothing else,” he said.

The brand and its lead agency on the project, Mosaic, decided to design a pop-up dome rather than renting a space because it gave them the freedom to work outside the constraints of one particular space.

“The dome is truly a blank canvas. It gives us the ability to really do whatever we want. The idea is to be immersed inside this dome and totally transport people out of the norm,” Bascom said.

Using a pop-up structure also allows Stella to travel with the concept, which the brand is considering.

The company started promoting the event via a 30-second spot by 360i in addition to social media, and has already sold out six dates at $125 a ticket. In total, Bascom expects about 2,000 consumers to attend Sensorium.

In addition to consumers purchasing tickets, the brand has tapped Veritas Communications to invite press and influencers. UM handled the media buy.

Stella Artois Takes Torontonians On A Journey Of The Senses added by Newsroom on August 14, 2015
View all posts by Newsroom →